How to Vegan DISCOVER THE ART OF PUBLISHING
Home other Schwarzenegger: “I’m slowly getting off meat, and I can tell you, I feel fantastic!” 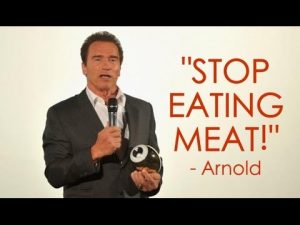 Arnold Schwarzenegger, former Governor of California and widely regarded as one of the best bodybuilders of all time, recommends people work on cutting down and eliminating meat from their diet just as he is doing. His doctors recommend he eliminates meat for health reasons, and his friend James Cameron recommends eliminating meat due to it’s severe and unsustainable environmental impact.

“The more I went to my physical (examinations) the more doctors started stressing: “Arnold you’ve got to get off meat”, so I’m slowly getting off meat, and I can tell you, I feel fantastic!”

WildAid in partnership with the Chinese Nutrition Society created the footage of Schwarzenegger and Cameron to kick off a new campaign focused on reducing meat consumption in China, in line with the latest guidelines published by the Chinese government.

In reference to animal agriculture being the largest source of greenhouse gas emissions (more than the entire worldwide transportation emissions combined) and therefore the leading cause of climate change, Arnold remarks:

And Schwarzenegger again reiterated on the point he made last year: meat isn’t necessary in the world of bodybuilding; it’s possible to be a successful bodybuilder without consuming meat and that meat certainly isn’t necessary to be strong. Arnold stated:

“If they tell you to eat more meat to be strong, don’t buy it.” – Schwarzenegger

There are many reasons why doctors would have recommended Schwarzenegger should eliminate meat from his diet. Preventing disease in the first place is much better than having to try and treat disease after it’s already occurred.

Amongst many notable doctors, Dr. Kim Williams, the President of the American College of Cardiology and Chief of Cardiology at Rush University, advocates a plant-based diet for heart disease prevention.

Heart disease is the #1 killer in the United States, and elevated cholesterol appears to be a primary cause. It was proven decades ago that heart disease could be reversed with a plant-based diet. And yet hundreds of thousands of Americans continue to needlessly die.

Dr. Williams is crystal clear when he talks about diet and heart health. He says that to prevent heart disease, “the most important things are plant-based nutrition, exercise, and weight loss. Most people will succumb to heart disease, diabetes, or hypertension on the standard American diet, which is why heart disease is the biggest killer in America. The best primary prevention strategy is improved lifestyle.”

When he speaks to patients, he tells them frankly that their health is in their own hands:

“If someone already has heart disease or plaque, I will always recommend dietary change and exercise. Heart disease has killed more people in the United States than any other disease since the Spanish Flu epidemic of 1918-1920. I tell them they don’t have to be one of those statistics.”

It’s been 16 years since Dr. Dean Ornish’s landmark 1990 study showing that heart disease can be reversed without drugs and surgery[1]

So why aren’t plant-based diets mainstream yet? Dr. Neal Bernard, President of the Physicians Committee for Responsible Medicine (PCRM) notes that the herd mentality in people is such that people will generally continue doing ‘what the majority of other people are doing’ – as they innately feel safer staying with the majority – even when what the majority is doing is not in their best interests. To redirect this herd mentality, Bernard suggests, ‘the herd’ consistently need pushes in the right direction.

The main body responsible for overall influencing people’s dietary choices in the USA is the USDA – an organisation unfortunately also tasked with promoting the meat and diary industries. Their dietary guidelines are released to the American public every five years, however due to their severe conflict of interest it’s of no surprise they haven’t made strong recommendations for plant-based diets as yet.

This silly situation isn’t new  – 15 years ago Dr Caldwell B. Esselstyn noted that the USDA’s American Dietary Guidelines are produced by the very same organisation also set up to promote the meat/diary industry and results in a conflict of interest which was “in total violation of the moral imperative of our (medical) profession”. [2]

And despite the Physicians Committee for Responsible Medicine bringing lawsuits against the USDA in 1999, 2010, 2011 and 2016 over the misleading dietary guidelines and conflicts of interest it still continues to this day.

So until the USDA is replaced by an impartial organisation, we have to rely on other thought-leaders such as Arnold Schwarzenegger and James Cameron to use their collective muscle to fight for changes that will result in improving the world’s health.

Since the release of Cowspiracy, a documentary executive produced by actor Leonardo Di Caprio, many people have come to realise the devastating effect animal agriculture has on our planet – and as our population increases that it’s simply not sustainable.

Trillions of sentient animals suffer needlessly every year and in perpetuating the current unsustainable system we are wreaking havoc on the environment and our own health in the process. However more people than ever before are realising there’s an easy solution that solves all of these problems: switching to a vegan lifestyle – and there is hope for the herd.