With Trump As President, It’s More Important Than Ever To Go Vegan

other
By Stephanie McCosker
February 15, 2017

For many people in the U.S. — and across the globe — recent political events have left the future looking ominous, indeed. Things seem more uncertain than ever, and there’s no shortage of important issues competing for our attention and concern. But our biggest collective threat (by far) is climate change. If our planet heats to an excessive temperature, there’s no escaping the consequences; even the one percenters won’t have anywhere to go. This is the only earth we have, and Mars is far from ready for colonization.

Scientists predict that if the earth’s temperature continues to rise, humans (and other species on the earth) will face an array of ecological horrors, from large-scale drought to oppressive heat waves to massive flooding. Certain areas of the planet are likely to become uninhabitable, and some predict climate wars (violent uprisings caused by the changing global landscape) will dominate our future.

Despite this imminent threat to all life on earth, one of President Trump’s first actions after taking office was to remove the pages on climate change from the White House website. It appears that the fight to save the planet is not an urgent priority for this administration.

Meanwhile, scientists say immediate action is necessary in order to stem the rising tide of temperature and avoid catastrophic consequences; we can’t afford to wait four years for a new administration. The first six months of 2016 was the warmest half-year on record, and evidence mounts that a crisis is looming.

Given a lack of leadership on the issue, taking action is up to each of us. Luckily, there’s a lot we can do on our own to insure a better future.

The Power Is Ours

Given the current political circumstances, it’s easy to feel discouraged. But it’s important to remember that the future of our country doesn’t rest in the hands of one man.

As individuals, we have more power than we realize. The choices we make in our daily lives can be even more effective than legislation or executive orders or policy positions. And the more of us who take action, the more change we can affect.

When it comes to curbing climate change, there’s one behavior shift that’s more powerful than anything else we can do: adopt a vegan lifestyle. Believe it or not, science has shown that veganism is the most efficacious solution to our world’s most pressing concerns. 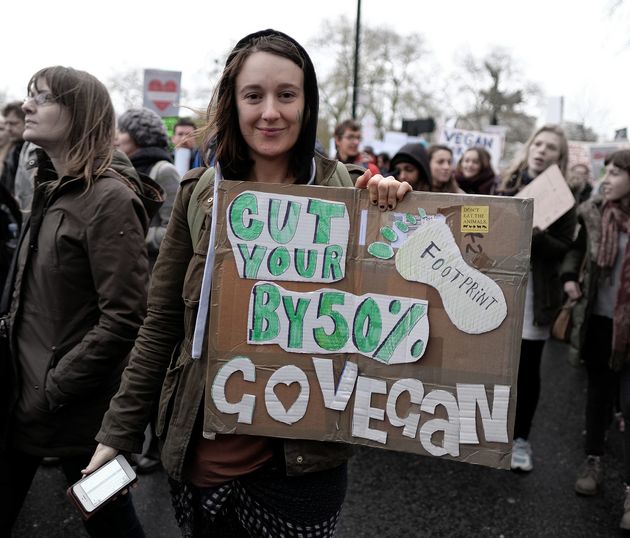 A protestor promotes veganism at the London climate march. Photo by Alisdare Hickson via Flickr/cc.

There’s overwhelming evidence that animal agriculture is the most destructive force on our planet. According to a meticulously researched Worldwatch Institute report, livestock accounts for a whopping 51 percent of worldwide greenhouse gases (GHGs). That means raising animals for food is more destructive — by far — than cars, trucks, airplanes, boats, and all other transportation combined.

And that’s not all. Livestock covers 45 percent of the earth’s total land, and uses 30 percent of the earth’s fresh water. Animals raised for food produce 335 million tons of “dry matter” excrement annually on U.S. farms alone — a massive threat to soil and water systems. As many as 2.7 trillion animals are pulled from the oceans each year; some predict the waters could be fishless by 2048. Animal agriculture is also responsible for up to 91 percent of Amazon rainforest destruction — a fact rarely mentioned when students learn about the ruination of the rainforests in school.

Animal agriculture is also the leading cause of ocean dead zones, water pollution, habitat destruction, and species extinction. A new study has revealed that 60 percent of the world’s primate species are now threatened with extinction, largely due to “unsustainable human activities.” And it’s not just primates. We’re in the middle of a human-caused extinction on the most massive scale, with the earth losing as many as 30,000 species per year.

While we’ve been led to believe that the fossil fuel industry is the biggest threat to our planet, these numbers are proof that animal agriculture is an even bigger problem.

But by making different choices, we could put a stop to this tomorrow. In the words of late researcher Robert Goodland: “there is surely no more compelling motivation to act than the knowledge that replacing livestock products with better alternatives may be the only pragmatic way to stop catastrophic climate change from imperiling much of life on earth.” 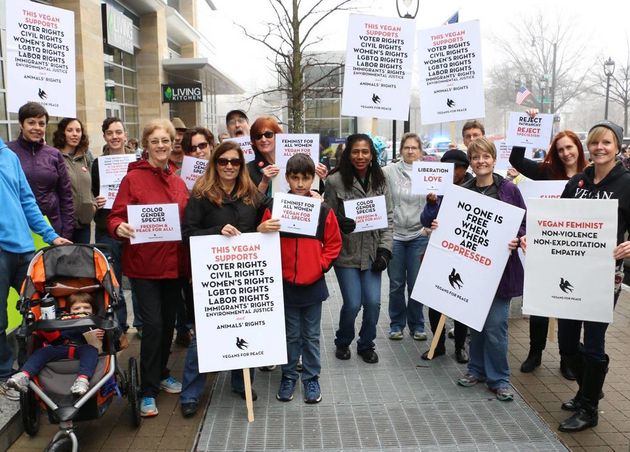 Vegans unite at the women’s march in Raleigh, NC. Photo via Vegans for Peace.

When climate change is on the agenda, veganism is the proverbial elephant in the room; it’s an issue rarely discussed by scientists and change-makers because it seems too “unrealistic” or “extreme” to expect people to change their diets.

Yet adopting a vegan lifestyle is the simplest way any single human being can make a demonstrable difference for our planet. According to a 2014 study, the dietary carbon footprint of meat-eaters is twice that of vegans. So why don’t we hear more about it?

Even former vice President Al Gore, a lifelong champion of environmental causes (and vegan himself), told musician Moby that the reason he didn’t address this issue in his documentary An Inconvenient Truth was because: “For most people, the role of animal agriculture in climate change is too inconvenient of a truth.”

In other words, no one wanted to hear it. A 2014 documentary, Cowspiracy, outlined in detail the hidden truths about animal agriculture’s impact and the lack of accountability by large environmental groups.

The meat, dairy, and egg industries are incredibly powerful, and Americans have been indoctrinated with decades of nutritional misinformation. And despite their deadly consequences, the government heavily subsidizes animal-based foods. No matter what ad campaigns have led people to believe, cow’s milk doesn’t do a human body good; chicken isn’t a “healthy” protein; and red meat doesn’t make men more masculine (quite the opposite, in fact — it causes erectile dysfunction).

In addition, most processed foods are pumped full of extra fat and sugar, specifically designed to be difficult to resist; cheese even has addictive qualities similar to heroin.

And unfortunately for consumers, the animal agriculture industry is doing everything in its power to keep people hooked on meat and dairy; just turn on the TV and it’s clear that there’s big money in bacon, Big Macs, and extra cheese.

But regardless of any hype, the truth is that transitioning to a vegan diet is incredibly easy in this era. Plant-based food options abound in supermarkets, fast food joints, and restaurants; the list of celebrity vegans and plant-based proponents grows by the minute; and Instagram, Pinterest, and Facebook are filled with recipes, information, diet plans, and support groups. There’s literally never been a better — or more important — time to go vegan. 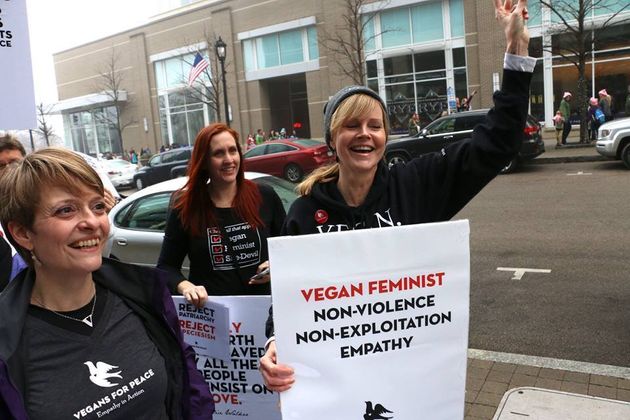 Vegans show solidarity at the women’s march. Photo via Vegans for Peace.

The environment isn’t the only crisis that can be cured with a plant-based diet. The ranks of uninsured Americans are likely to grow significantly in the coming years, and we all need to protect ourselves. Many health experts — such as the folks at the prestigious Physician’s Committee for Responsible Medicine — agree that opting out of eating animal products is the best form of preventative care for the most prevalent of health problems.

Major institutions are also getting on board with the growing body of evidence supporting vegan eating. The American Academy of Nutrition and Dietetics recently released a revised position paper acknowledging the health and environmental benefits of a vegan diet — as did a 2015 report from the government-sponsored Dietary Guidelines Advisory Committee. Kaiser Permanente, the nation’s largest health plan, actively advocates for plant-based living, and more and more doctors are offering plant-strong nutrition as a key component of patient care.

Turn on the news or troll a social media feed, and the buzz about plant-based eating seems to grow louder by the day. But it’s not enough — not yet. Currently, vegans comprise less than two percent of the U.S. population (approximately). If we want to put a pin in climate change and reverse the multitude of public health crises, we need to make a large-scale shift towards vegan eating. More people need to opt into this lifestyle change, and the time is now.

Our planet needs protecting, before it’s too late.

Eat Plants, Save the Planet

Right now, many people are feeling powerless. But we are not powerless. Change starts in the supermarket and at the kitchen table.

A 2015 study suggested that if everyone went vegan, we’d save eight million lives by 2050; reduce food-related greenhouse gas emissions by about 70 percent; and cut healthcare bills by about $1.5 trillion. The study’s conclusions also suggest that curbing climate change will be essentially impossible without a large-scale shift to plant-based eating; in other words, small/incremental improvements won’t be enough.

As we move into an era of uncertainty, going vegan is the best way to demonstrate our commitment to compassion, sustainability, and a better tomorrow. Together, we can change the world.