How to Vegan DISCOVER THE ART OF PUBLISHING
Home other Turin, Italy’s first ‘vegetarian city’

Aloud whirring sound emerges from the kitchen at Villa Somis, a high-end Italian restaurant in the hills overlooking Turin. Perhaps it’s a coffee machine, or a prosciutto slicer. But when chef Antonio Chiodi Latini comes out, he’s holding two glasses of light green “vegetable extract”, to wash down our vegan biscotti. Chiodi Latini is 56, and until three years ago was known in certain local circles for his elaborately presented dishes, such as seafood pasta with edible flowers or perfect cylinders of raw beef. The menu at his new pop-up venture, Chiodi Latini New Food, is no less fancy, but completely free of all animal products.

“My old customers say: ‘It’s amazing how you used to cook, you were good at making fish soup, and lovely meat,” says Latini, who opened for business on the top floor of the elegant villa this summer, having turned vegan himself three years ago for health reasons. “But people want to try new things, and spend an evening eating food that makes them feel good with their own body and soul.”

Turin is famous for cars, football, the winter olympics – and now vegetarianism, after new mayor Chiara Appendino announced plans to turn it into Italy’s first “vegetarian city” earlier this year. Traditional butchers have expressed their horror at the proposals, which include introducing a weekly meat-free day, and teaching schoolchildren about animal welfare and ecology. In my hand, I have the city’s “veg map” for tourists. I’ve come for the tour. 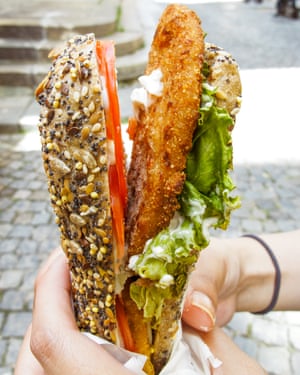 “In Turin, there are now more than 30 restaurants and shops serving vegan and vegetarian food, which for a city this size, is possibly the highest number in Italy,” says Stefania Giannuzzi, the deputy mayor behind the initiative. “We wanted to value and recognise this aspect of the city.”

Vegetarian visitors wandering the streets of the northern Italian city won’t take long to stumble across one of the growing number of new vegetarian delis and cafés. Despite the reputation of the Piedmont region for hearty Alpine fare (one of the most famous local dishes is bollito misto, a stew made from boiled veal, beef and chicken) the choice on offer is impressive.

“Turin has always been at the forefront of things,” says Claudio Viano, who opened the city’s first vegetarian restaurant, Mezzaluna, with his partner Daniele 20 years ago. “Turin and maybe Milan are now the best places in Italy to visit for vegan food,” he says, praising the Slow Food Movement which was set up in the nearby town of Bra.

At L’Articiocc, a café in central Turin specialising in meat-free Ligurian food, a set menu offers three dishes from a selection behind the counter. I go for gnocchi tossed in a delicious red pesto made with ground nuts instead of parmesan, a courgette and quinoa bake and a vegetable focaccia. The dairy-free chocolate and almond torte is less impressive, but Giannuzzi recommends the desserts at another nearby vegan restaurant, Soul Kitchen, instead.

Giannuzzi insists that she is not trying to clash with the city’s meat producers and agricultural associations, who in May organised a barbecue in protest against falling sales and health scares using the hashtag “pork chops to the rescue”. She instead emphasises the environmental benefits of turning vegetarian, citing UN guidelines and the Paris climate agreement as good reasons to cut down on the city’s meat consumption. 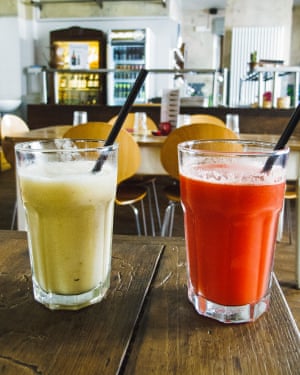 So far, finding vegetarian and vegan food in Turin has been easy, but it’s time for the final challenge: can I eat a fully vegan pizza, without having to skimp on cheese and pepperoni? Well, sort of. I’m invited to cool vegan restaurant and bakery Ratatouille by a group of local animal rights campaigners. A small group of them recently staged a protest at a major food festival in the city, dressed up in “human meat” packaging and covered in fake blood.

They excitedly tell me that Radiohead singer Thom Yorke has been spotted in Coox, one of the newest vegan places to open in Piazza Vittorio Veneto, where young people gather each evening for drinks and snacks. “It’s only in the last few years that Turin has changed,” says Monica Schillaci, an activist in her early 30s who was vegetarian until three years ago, when she decided to turn vegan after seeing an animal welfare campaign billboard. “Even a few years ago, you couldn’t get a breakfast as a vegan. But now in almost every bar there are soya milk cappuccinos and macchiatos. And sometimes even vegan pastries.”

We share a fluffy “tegamino”-style pizza, made in a pan, with “vegmozzerella” and Quorn sausage. Vegan cheese remains unappetising wherever you are in the world, but the pizza itself has a particular, mouthwatering taste only found in Italy. Not only do the vegetarians of Turin have the backing of the mayor, they also have Italian know-how. And that combination might just be enough to see the controversial “vegetarian city” project succeed.