How to Vegan DISCOVER THE ART OF PUBLISHING
Home Health The hardcore life of a man who went vegan, lost 200lbs, and became a marathon runner

In his own words, Josh LaJaunie grew up hunting, fishing, drinking, eating playing football and getting fat. As he tipped the scales at 400lbs (180kg) in 2011, he decided to change his life after he read about a vegan ultra-marathon runner. Between 2011 and 2014, the 38-year-old from South Louisiana, lost 200lbs (90kg) and became a committed vegan. In 2013, he ran his first 10k race under one hour. Half a decade after the life of vegan runner Scott Jurek flicked a switch in his brain, he appeared on the cover of the US magazine Runner’s World December 2016 Reader’s Issue.

“I had always been a big guy, tall guy, and wasn’t sure that plants alone could adequately nourish me,” LaJaunie, a property manager, tells The Independent, describing the 10k as a “big achievement” which had taken “a lot of commitment and training.”

In September 2016, he finished third at the Wildcat 100-mile marathon in Florida – his longest to date – and ran the New York City marathon in November. Looking to the future, he hopes to run a 10k in under 40minutes. 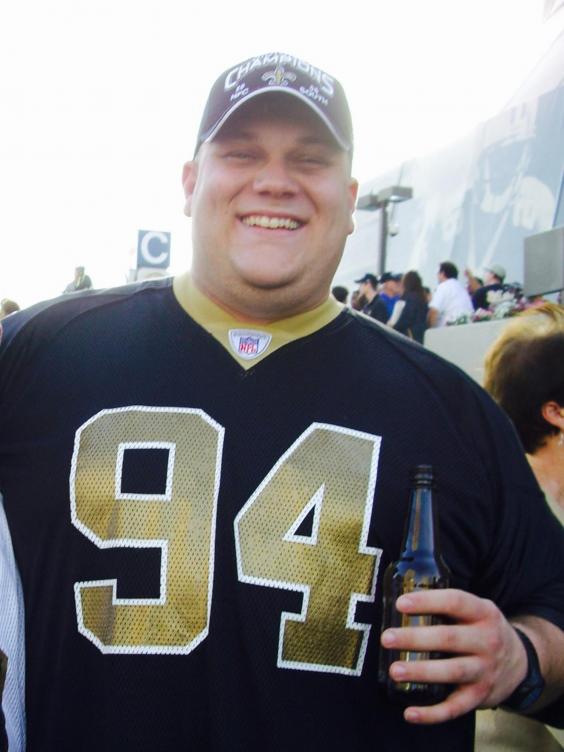 Josh LaJaunie before his weight loss

As a teenager and a promising lineman in his high school American football team, LaJaunie was promised a scholarship at the University of Arkansas at Monticello, and his coaches encouraged him to gain weight. But instead of hitting the gym, LaJaunie ate himself heavier. Among his meals were traditional Cajun fare, including gumbo, jambalaya, pot-fried rabbit or squirrel cooked in that gravy, crawfish, or deer chilli. In other words, about as far from veganism as possible.

“I came upon the concept of a vegan diet in the book Born To Run when I learned of Scott Jurek. After reading his book, I went on to Rich Roll’s book Finding Ultra. From there I watched Forks Over Knives, and that really sealed the deal for me.”

LaJaunie is therefore familiar with the confusion and protests that vegans often face from baffled meat-eaters who wonder how he survives without bacon or rib-eye steaks.

But he stresses that neither weight loss nor marathon running is the key to taking the plunge and committing to veganism.

“Change is your goal. Not weight loss, not a marathon. Change. If you can be open to big change you’re well your way to having a more authentic human existence.”

Nowdays, he sticks to a diet of whole plant foods, avoiding too much fat and added sugar and sweeteners.

“I don’t calculate or do any accounting with respect to calories. I just eat. When I train and race, I eat a tad more because I’m a little hungrier.”

“I cycle through the same three meals all the time. Either a big baked potato smashed in to a kale salad, a big bowl of steamed greens with beans du jour, or a bowl of oats with frozen cherries with a touch of almond milk.”

“As far as snacks, I love apples. I usually want calorie dilute foods. 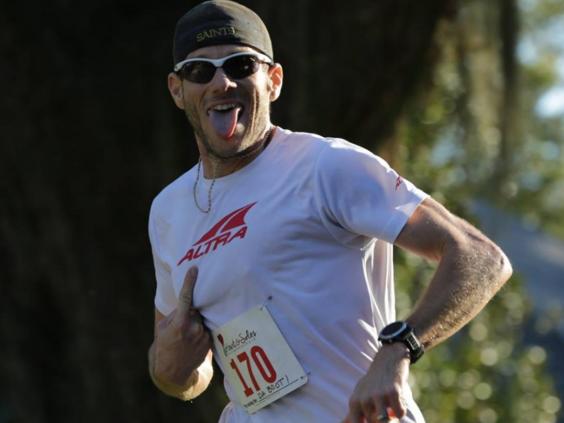 “When I’m choosing what I’m going to consume on race day, I actually look for calorie density so I can get calories without bulk,” meaning he opts for protein bars for a short period of time. “The only adjustment I make is I’ll have a fast five days out, then have a very clean potato-rich couples days, then back to normal portions of my normal diet for the day leading up to the race, with nothing much at all in the final 12 hours before the start.

Since transforming his health, LaJaunie is resolute veganism is the lifestyle that suits him best. “I think strict whole foods centered veganism is the healthiest way of existing as a human. I also think that over time us humans have developed ability to eat meat in times of starvation or opportunity. But by no means does this mean the human being is now an obligate carnivores.”

“But most of the people I know would entertain less meat before they would ever entertain ‘no meat’, so not making it an all or nothing proposition is important to the overall growth of the movement, in my opinion.”

As for those who shun veganism as unhealthy, LaJaunie has two words: “Prove it.”