It’s hard out there for a vegetarian. Especially when it comes to snagging quick eats on the cheap. In a fast-food world where the burger reigns supreme and drive-thru menus tout vegetable sides inexplicably containing pork fat, options are, well, limited. But that doesn’t mean it needs to all be doom and gloom — all the major fast-food players have at least one tasty veg-friendly choice on their roster to keep you satisfied. And to save you from staring blankly at the drive-thru screen searching for something you can eat, we’ve rounded up the very best option at all the big chains.

Important note: many of the selections on this list are fried, which means there’s no guarantee that they’re not cooked in the same oil as non-veg items. If you’re ordering at a fast-food spot, this is probably a risk you’re already willing to take, but just know that if you are conscious of contamination, many of these suggestions will not work for you. You should probably just ask. Or just say “who cares,” because you’re starving. 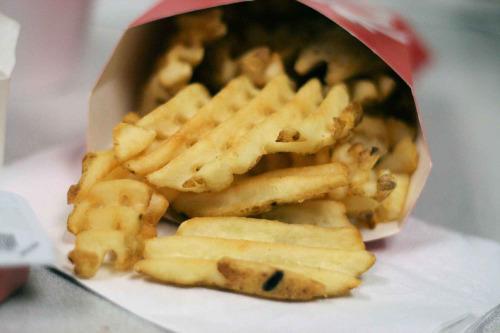 When a place is named after the animal it serves, you’re kinda out of luck. But since you’re here (why are you here?!), the waffle fries are good. And they’re allegedly vegan.

Both Carl’s Jr. and Hardee’s (Carl’s Sr.?!) offer up a “Veg It.” option for their Thickburgers. At Hardee’s, that just means a burger, but minus the patty. At Carl’s, though, they offer up a package of fried zucchini you can load onto the bun. Why they haven’t seized the opportunity for a commercial featuring Paris Hilton washing a car while eating a zucchini is beyond us, but it seems like a missed opportunity for their campaign. 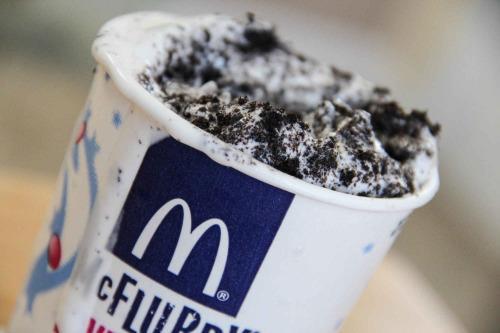 You might be tempted to go for the legendary fries at the Golden Arches, but turns out the oil they fry ‘em in actually contains beef flavoring, so don’t be fooled. Instead go for a creamy, cookie-filled McFlurry. When it’s your tastiest option, no one can fault you for eating dessert for dinner. NO ONE.

Whataburger’s biscuits are delicious on their own, and especially with honey butter. But that does not a balanced meal make. That’s why the egg & cheese biscuit is king. And yes, it’s still good with honey butter. 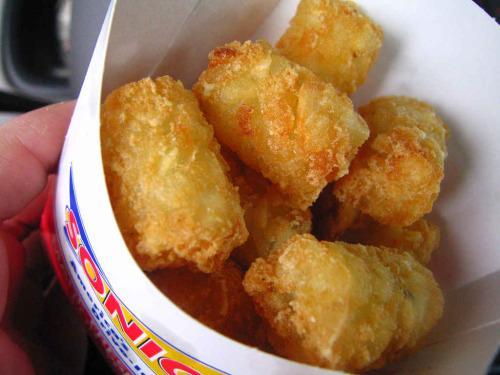 Sonic is the only fast-food chain where it is imperative to forgo fries for an order of cheese sauce-covered tots instead. Golden and crispy on the outside, fluffy and starchy on the inside, these salty spuds are the spirit of sonic and demand space in your stomach. Of course you could choose to get them plain, but when melty cheese is a choice, there’s really no choice at all.

Jack in the Box: Stuffed jalapeños

Jack’s forte is gigantic burgers, some of which are stuffed between grilled cheeses that aren’t on the regular menu. Luckily, they have all-day breakfast, with egg sandwiches and mini pancakes. But let’s be honest. If you’re here, it’s because you want something fried. So thank goodness for cheesy jalapeño poppers, which go pretty well with curly fries and a late-night viewing of The Wall. 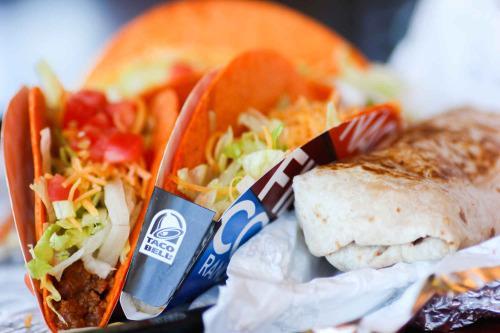 Taco Bell: Anything and everything!

T-Bell is without a doubt the greatest fast-food spot for meatless folks, but that’ll happen when your options are exactly the same as everyone else’s. Pretty much everything at Taco Bell can be made meat-free with beans and/or potatoes as the replacement protein, you just gotta ask. My personal favorites are the Crunchwrap, Cheesy Gordita Crunch, and Quesarito, but really, the world is your beefless burrito. Or whatever.

What, you didn’t know that Arby’s has mozzarella sticks? Fair enough. It’s hard to see past the Meat Mountain. But, as with any place that serves them, the mozz sticks at Arby’s are insanely good — as good as anything that you can get at a bar, but cheaper. 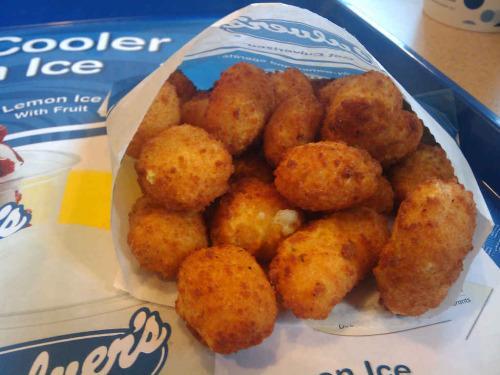 Most people head to this Midwestern chain for the ButterBurgers, but even if you’re a full-time carnivore, the Wisconsin cheese curds are the real star. The chain started in the home of the curd, so it only makes sense that they’re one of the few fast-food spots where you can snag some of these squeaky morsels of all that’s right in the world. Made with both yellow and white cheddar and deep-fried to crispy, golden perfection, these lil’ guys are addictive and almost too poppable.

“This place basically invented the root beer float. And they use cane sugar. If you can get one in a frosty mug, it somehow tastes even better. That’s probably not gonna happen at one with a Taco Bell stapled to it, but you can still dream.” – My editor who insisted on writing this because I hate root beer 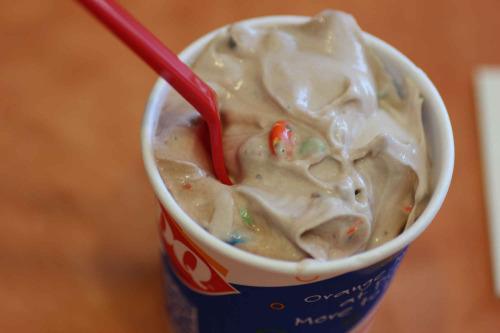 This one is a given. Shockingly, DQ has not (yet) found a way to incorporate bacon into all of their signature stormy soft-serves, which means they’re all fair game. And delicious. The flavor options are plentiful, and while we could give you an exact pick, we know it’s rare for a veggie to have this many choices, so we’re gonna let you do you. But also we really like Reese’s. NO PRESSURE.

I’ve been spreading the gospel of KFC potato wedges for approximately 26 years. I’m only 23, so you do the math. They’re just that good. You can actually see the seasoning on these wedges — they’re salty, peppery, and kicked up just the right amount of notches to make Emeril happy. Though they’re already lightly battered and crunchy, if you get a particularly crispy one, you’re in for a treat. To give you a sense of how you’ll feel after biting into these babies, my boyfriend and I once accidentally ordered a family-size portion of them at 9am in Penn Station. There were no regrets. 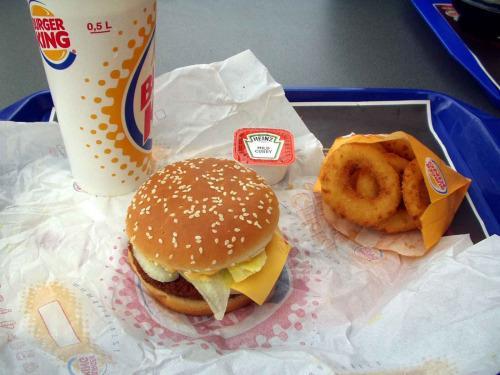 The King bestows upon all vegetarians the gift of an actually solid, complete meal comparable to that of a meat-eater dining there. For one, they actually use MorningStar patties, aka what every vegetarian awkwardly brings to a BBQ, so you know this is legit. But they also have onion rings. We know other spots have those too, but BK’s are particularly tasty, and obviously taste way better when accompanied by a burger, an option seldom seen by vegetarians when it comes to fast food. And yes, we know this is technically two picks, but your Grandma told us you were looking thin.

Contrary to popular belief, the Pythagorean theorem actually proves that it’s a really bad life choice to order fries sans a Frosty on the side. Without the Frosty, we’d probably be telling you to snag a broccoli and cheese baked potato (still a good option!), but the sweet-and-salty combo of hand-cut fries dipped in a creamy, chocolatey shake is where it’s at, for anyone, meat-eater or not. And yes, we know this is also technically two picks, but that’s on Pythagoras, not us. 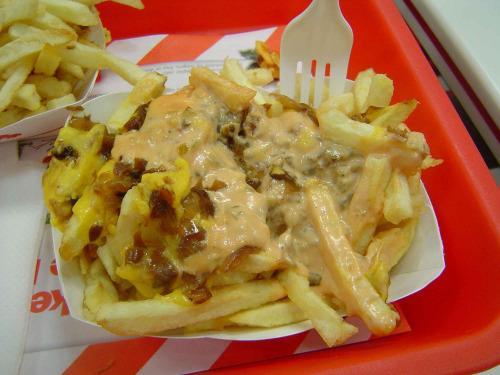 Sure, you could get the not-so-secret grilled cheese, but have you forgotten you’re at In-N-Out? Because you are. And that means it’s your responsibility as a contributing member of society to get something Animal Style. And since you’re not getting a burger, you’re getting fries. Covered in melty cheese, grilled onions, and special sauce, you’ll be just as satisfied as your meat-eating pals. Though might we suggest an Animal Style grilled cheese be a future thing that exists?

Upon the announcement of veggie sliders coming to Harold and Kumar’s chain of choice, meat-eaters of the world acted as if this new development had a profound effect on them. It did not. Instead, leaf eaters were just getting the extra option they were fully entitled to. The Dr. Praeger’s sliders full of veggies like carrots, zucchini, peas, spinach, and broccoli are here, and they’re pretty damn good. They even come with a choice of sweet Thai, honey mustard, and ranch sauces. Unfortunately, these things aren’t permanent menu fixtures and will disappear at some point, so once that sad day comes, go for the onion chips. These fried-up petals are tasty as hell and it’s basically like eating a deconstructed, fast-foodified blooming onion.

You might take a glance at the Popeyes sides menu and think you have a killer arsenal of choices. But you would be sorely mistaken. Red beans? Pork fat. Cajun rice? Meat sauce. Green beans? Turkey bacon. Mashed potatoes & gravy? Pork. It’s a sad, sad, Southern world. But it won’t be if you get these crispy, Cajun-battered fries bumped up with spices like garlic powder, cayenne, and paprika. With a crunchy exterior and a flavorful-but-not-overpowering spice blend, these guys don’t even require a dipping sauce, and are the best you can do as an herbivore getting down at Popeyes. I don’t think I need to tell you that these must be paired with a fresh, fluffy biscuit — but these must be paired with a fresh, fluffy biscuit. Class dismissed.