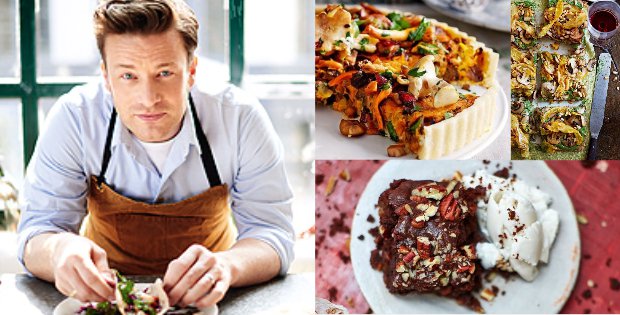 We all want to impress family and friends with decadent vegan food for Christmas, so no doubt excitement over designing the Christmas menu is rising by the minute!

AND OF COURSE, EVERYONE WENT CRAZY WHEN STAR CHEF JAMIE OLIVER SHARED HIS VEGAN CHRISTMAS RECIPE SUGGESTIONS WITH HIS MASSIVE AUDIENCE.

I am saving you the trouble of making the hard decisions on your own, and since I have been feeding a number of picky male meat eaters with my cruelty-free dishes, I believe I am quite good at picking the ones that will leave their taste buds fully satisfied.

If you’re looking for phenomenal Christmas food that will leave everyone begging for more, here it is:

(and don’t forget to share with all your vegan buddies)

We’re starting with this super yummy

Start by preparing the artichokes, peel them back to their pale, light leaves, then halve them and remove the hairy chokes with a teaspoon. Place them in a pan with just enough water to cover them. Add the garlic cloves and a little squeeze of lemon juice and cook until the stalks are tender.

Drain in a colander, then place the artichokes straight back into the empty pan with 2 or 3 tablespoons of olive oil and fry for 4 minutes to get a bit of colour on them. When they’re slightly golden, remove from the heat, squeeze in a little lemon juice, add the mint and season carefully to taste.

Remove 4 artichoke halves from the pan and put to one side, then mash all the rest in the pan, using a fork to squash the garlic out of the skins (throw the skins away).

Smear across your basic bruschetta, tearing one of the reserved artichoke halves over the top of each. PS It’s also really nice to add a handful of freshly grated Parmesan to the mashed-up artichokes.

“Being vegan doesn’t mean compromising on flavour, as this recipe proves. Crunchy and full of spices, everyone will be tucking in ”

Tofu gives this nut roast a creaminess that makes it seem decadent. You can make individual portions or 1 big tart.

“This tart is perfect for Christmas – make it the day before and heat through once dinner’s nearly ready. If you can’t get wild mushrooms, use more chestnut ones. ”

“Sprinkle this herby, spicy, zesty mixture on your Christmas lunch veggies for loads of extra flavour ”

Use a speed peeler to peel 4 good-sized strips of zest from the orange and lemon. Add these to a mortar with the bay leaves, allspice berries, fennel seeds and a pinch of salt. Crumble in the cinnamon stick, then pound the lot with the pestle until it’s well broken down. You’ll have to get stuck in as this will take a few minutes! If you’re feeling lazy you could use a food processor, but I personally think the results are better if you do it the old-fashioned way.

Once you’ve got a rough powder (don’t worry too much if there are still a few bigger bits left), add the rosemary and thyme leaves and pound again until these are bashed up, too. Finally, add the rest of the sea salt, grate in the nutmeg and give it all a good mix with a fork. The rub will keep in an airtight container for a couple of weeks.

“Being a vegan doesn’t mean you can’t create knockout puddings. This dark chocolate, honeycomb, almond and berry dessert is even better than it sounds ”

“Gooey, nutty and seriously chocolaty, these vegan brownies are a total joy to eat ”

Preheat the oven to 180ºC/350ºF/gas 4. Grease a square baking tin (roughly 20cm) with a little oil, then line with greaseproof paper.

Place a heatproof bowl over a pan of simmering water, making sure the base doesn’t touch the water. Break 150g of chocolate into the bowl and allow it to melt, then set aside to cool slightly.

Meanwhile, sieve the flour and cocoa powder into a large bowl, then stir in the sugar and a pinch of salt. Halve the vanilla pod lengthways, scrape out the seeds, then add them to the bowl. Stir in the oil, soya milk and melted chocolate until combined.

Roughly chop and stir in the remaining chocolate and most of the pecans, reserving a few for the top. Pour the mixture into the prepared tin, spreading it out evenly. Sprinkle over the remaining pecans, then place into the hot oven for 20 to 25 minutes, or until cooked on the outside, but still gooey in the middle.

Leave to cool for around 5 minutes, turn out onto a wire cooling rack, then serve warm with a scoop of vanilla ice cream, if you’re feeling extra indulgent.

“Millet flakes are naturally gluten free, so a great way to get some texture in your gluten-free biscuits – these ones are delicious ”

These are crumbly, gluten–free vegan treats, which pack a hit of slow–release energy from the millet flakes.

Preheat the oven to 180C/gas 4. Combine the olive oil, yoghurt, lemon juice and zest of 2 lemons in a bowl. In a separate bowl, mix all the dry ingredients. Pour the wet ingredients into the dry and mix until you have a soft, doughy consistency. If it’s too dry, add a little more yoghurt.

Roll into 20 evenly sized balls, then place on a baking tray and press down lightly to flatten. Sprinkle with the extra millet flakes and coconut, and the remaining lemon zest. Bake for 10–15 minutes, until golden. The biscuits will be soft when they come out, but will harden as they cool.

Halve the vanilla pods lengthways, scrape out the seeds, then add to a large bowl, discarding the pods. Add the remaining ingredients and stir well to combine.

If you don’t have an ice cream maker, place the mixture into a large freezer-proof container and pop it in the freezer. Allow to set for 3 to 4 hours, giving it a good whisk every 30 minutes or so.