other
By Stephanie McCosker
September 29, 2016

David Carter played in all 32 games for the Arizona Cardinals in 2011 and ’12. (Paul Spinelli/AP)
David Carter, a 6-foot-5, 300-pound defensive lineman, and his teammates are at a steakhouse, the second-most-frequented nonresidential house for NFL types after the field house.
Beefy football players order large slabs of steak. Knives cut through the buttery brown exterior and forks puncture the reddish center.

In front of Carter sits a dish of green beans, no butter.

This was a familiar scene for the now-retired Carter in his final couple of seasons as the rare vegan football player. After adopting the diet in 2014, his 300 pounds were 100 percent plant-powered, as the vegan diet prohibits the consumption of all animal products, including honey, eggs, meat and dairy.

“Socially, it kind of isolates you,” Carter said. “Football is a machismo sport, which is great, but everything can’t be machismo. On the field and at practice, yes, you can be machismo, but when it comes to diet, you need to have compassion for your body.”

As a defensive lineman, Carter always focused on being big. A three-star recruit on Rivals.com coming out of high school, he worked his way up the depth chart at UCLA, eventually starting and earning the program’s Kenneth S. Washington Award for Outstanding Senior in 2010. Drafted in the sixth round of the 2011 NFL Draft by the Arizona Cardinals, Carter never could’ve imagined giving up his carnivorous lifestyle, fearful of becoming weak and skinny. He drank milkshakes and chomped down meat, consuming as much protein as possible. But as the years went on, he suffered from high blood pressure and nerve damage. He couldn’t feel half of his right hand and had agonizing tendonitis in most of his joints. He took painkillers but still struggled to do push-ups and even make a fist.

One night in 2014, he watched a documentary titled “Forks Over Knives” that explained how dairy and animal fats can cause inflammation in joints.

“It got me thinking, why do we need meat?” Carter said. “I need protein to be big and strong, but look at some of the largest and strongest animals in the world and none of them eat meat.”

When he became a vegan, all of his ailments dissipated, and his performance at practices and in the weight room improved.

“My food is my medication now,” said Carter, who played with the Cardinals in 2011 and ’12 before spending time with the Cowboys, Raiders, Jaguars and Bears from 2013 through ’15. Having hung up his cleats, Carter now travels the country advocating for the diet.

Carter recommends veganism to anyone in the NFL, a place that isn’t typically known for meatless meals. Tyrann Mathieu‘s agent claims the Cardinals safety is “90 percent vegan,” whatever that means. Aside from the Honey Badger’s quasi-commitment to the diet, one of the few other widely known vegans active in the NFL is wide receiver Griff Whalen.

Undrafted out of Stanford in 2012, the former college walk-on signed with the Colts and ended up spending four seasons in Indianapolis, logging 45 catches for 487 yards and three touchdowns while also handling return duties at times. He spent this past offseason and preseason with the Dolphins, but was part of Miami’s final cuts in early September. A couple of weeks later, he signed with his current team, the San Diego Chargers.

Whalen has been vegan for the last two and a half years. He grew up in Ohio, eating hearty Midwestern meals and “a lot of junk food.” Like Carter, he worried that eliminating obvious protein sources from his diet would leave him scrawny. But after extensive research, he made the switch and found his physical recovery and overall health improved.

At 5-11 and just under 200 pounds, Whalen is less physically intimidating than Carter. While Carter can pass on the trademark steakhouse fare in relative peace, Whalen doesn’t always get off as easy.

“Griff, look!” a friend hollered on an offseason golf outing, pointing to the side of the course. “There’s some twigs and berries over there if you get hungry!”

“Pretty much all of my teammates thought it was weird,” Whalen said of his diet. “Everyone’s first question is, ‘Where are you going to get your protein?’ ”

Both Carter and Whalen obtain most of their protein from legumes, such as beans, peas and peanuts.

Teammates peer over Whalen’s shoulder at team lunches, examining his food. At first glance, he appears to have a slab of red meat, but further analysis reveals just two sweet potatoes with the skin on.

“They see my plate and it kind of triggers a thought,” Whalen said. “They’ll ask questions about it. I would suggest [veganism] to anybody, but I don’t go out of my way to do it, especially with an NFL team. They have a special nutritionist. That’s not my job.”

But it is Mary Ellen Bingham’s. As team nutritionist for the Dolphins, Bingham can make suggestions and answer players’ dietary questions — but she can’t require anyone to eat or abstain from specific foods. During Whalen’s time with the Dolphins earlier this year, Bingham said numerous players approached her and the receiver inquiring about making the switch to veganism. In the NFL, protein is king, so when someone gives up the most prevalent sources of it and still maintains muscle while feeling improved performance, word gets around.

“It’s different for everyone,” Bingham said. “There could be other athletes that benefit from it, but it may not be for everyone.” 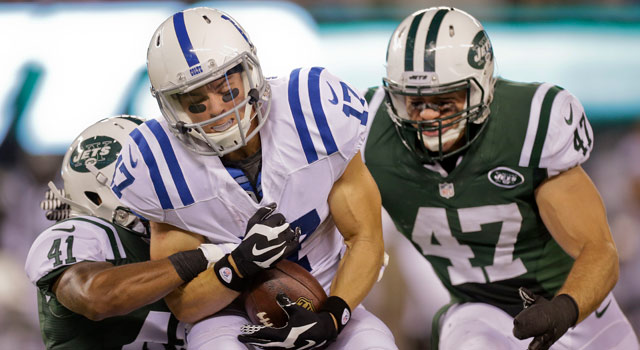 At Miami’s OTAs in June, Dolphins star Jarvis Landry attempted the diet — but he only lasted about a week.

“The hard thing is not eating a plant-based diet — it’s knowing what to eat and planning for it,” Whalen said. “All of a sudden, you can’t use meat, dairy, eggs, fish, anything — it’s like 90 percent of most guys’ diets. Landry struggled because he just jumped right into it without any type of planning, but it was just cool that he wanted to try and he was all excited about it.”

“I give Griff a lot of credit,” Bingham said. “It’s a lifestyle that requires a lot of attention to detail and discipline.”

But Carter says the extra effort is more than worth it. Unlike Whalen, Carter goes out of his way to advocate for veganism in NFL circles, especially in conversations with veteran players.

“I get a lot of success talking to older guys because they’re like 30 years old and have children,” Carter said. “I tell them, ‘You might want to change the way that you eat because you want to be around longer and see your family and your daughter graduate.’ ”

Carter knows the lengths guys will go to in order to stay big, and they aren’t always healthy.

“Offensive and defensive linemen have the worst eating habits, for sure,” Carter said. “Their job is to be a mass, be unmovable. They just eat whatever. Even before games, I’ve seen guys eat a big thing of fried chicken. They don’t understand the science behind eating healthy and what it can do for you.”

Bingham points out that many guys enjoy the foods they are currently eating and don’t want to give them up. Still, Carter has made it his mission to spread veganism. He spoke at July’s Animal Rights National Conference in Los Angeles, but he doesn’t always directly address animal rights. Carter believes it’s a trickle-down effect — expand veganism, expand the ethical treatment of animals — and he is most interested in extending the vegan movement to minorities.

Carter and his wife, Paige, work through their organization The 300 Pound Vegan. They argue that the vegan movement makes little effort to go into impoverished areas with food deserts (urban areas with scarce, if any, access to affordable, nutritious food), where Carter says people suffer the ravages of diabetes, obesity and heart disease. They work to include more people of color, more children, more athletes. He wants to reduce rates of high blood pressure across the league and across the country.

Both Carter and Whalen intend to stick with veganism for life — despite their love of the pigskin, of course.

Previous articleVegan and gluten-free recipe: Here’s how to make a great chocolate protein waffle
Next articleVegans Are Calling Their Cheese ‘Gary’