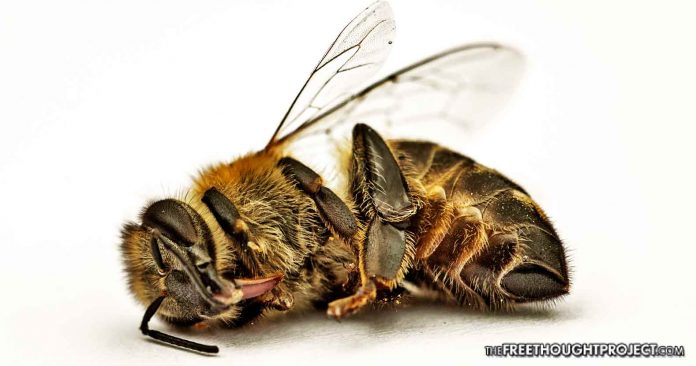 The rise of industrial agriculture — led by companies such as Monsanto that push monoculture, chemical-based farming and patented life forms — has brought a flood of pesticides that wreak havoc on natural ecosystems.

Insects and animals that eat insects fall victim to the millions of gallons of pesticides dumped on cropland, which run off into waterways, drift to nearby habitats and are picked up as residue by visiting pollinators.

In the 1980s, Bayer developed a potent new class of pesticide called neonicotinoids (neonics), which rapidly came to dominate industrial agriculture. In 2008, they represented 24 percent of the global market for insecticides, with Imidacloprid becoming the most widely used insecticide in the world.

Almost all U.S. corn and about one-third of U.S. soybean is treated with neonics. A “major advance” happened when agribusiness developed neonic-coated seeds, where every part of the growing plant becomes infused with the toxin, including pollen.

After government regulators, deep in the pockets of agribusiness, rushed to approve neonics for commercial sale, scientific studies began documenting the ecological impacts. Bird populations and other insectivores declined due to a lack of insect prey, as neonics became more widely used.

In 2006 we began seeing dramatic die-offs of honeybee populations, which play a vital role in pollinating food crops. Colony collapse disorder became a common occurrence, with bees showing classic signs of insecticide poisonings such as tremors, uncoordinated movement and convulsions.

Dead bees in and around hives showed the presence of neonics, and new research found that low-levels of neonics in bees made them susceptible to viral infections and mites, and reduced the reproductive ability of queen bees. Corn and dandelion pollen brought back to hives routinely tested positive for neonics.

Other insects are devastated by neonics, including the North American bumblebee which has seen a 90 percent decline. The threat to wild bees, honeybees and other pollinators is becoming ever more clear as more studies come out.
Now, the first long-term study of neonic impacts on wild bees has confirmed that the popular pesticide is linked to long-term bee decline.

Researchers in England looked at 18 years of data on 64 wild bee species and the use of neonics on the oilseed rape plant, which is widely treated with neonics, finding that about half of the total decline is due to the insecticide. All of the 34 species that forage on oilseed rape showed at least a 10 percent decline from neonics, with the most affected group experiencing a 30 percent decline from neonics.

The findings of the Centre for Ecologh and Hydrology team appear in the journal Nature.

“Historically, if you just have oilseed rape, many bees tend to benefit from that because it is this enormous foraging resource all over the countryside,” lead author Dr. Ben Woodcock told the BBC. “But this co-relation study suggests that once its treated with neonicotinoids up to 85 percent, then they are starting to be exposed and it’s starting to have these detrimental impacts on them.”

The research adds to several laboratory and short-term field studies which have found negative effects of neonics on honeybees and wild bees. Even the EPA has been forced to admit neonics kill bees.

“The negative effects that have been reported previously do scale up to long-term, large-scale multi-species impacts that are harmful,” said co-author Dr Nick Isaac. “Neonicotinoids are harmful, we can be very confident about that and our mean correlation is three times more negative for foragers than for non-foragers.”

While agribusiness will continue to deny that their favorite insecticide has anything to do with declining bee populations, well-informed consumers have already forced a change at retail stores. Large garden centers, including Lowes and Home Depot, have committed to eliminating neonic-treated garden plants which are often planted for the purpose of attracting pollinators.

However, the vast majority of neonic application is in the hands of companies such as Bayer and Monsanto that produce both seeds and chemicals to use on seeds and plants. Their friends at the FDA and other government agencies are complicit in unleashing neonics without bothering to truly consider how these toxins affect the environment.