Cecil the lion certainly wasn’t the first beautiful African creature slain by an American. Back in 2012, Donald Trump Jr. and Eric Trump went big-game hunting.
On Tuesday, the Internet mourned the death of poor Cecil, Zimbabwe’s most famous lion, and lashed out against Walter Palmer, a dentist from Minnesota who is believed to have paid $50,000 to kill him.

According to the Zimbabwe Conservation Task Force (ZCTF), Palmer and his team are alleged to have lured Cecil from a protected area on July 1, when Palmer is said to have wounded the lion with a crossbow. The group found a wounded Cecil 40 hours later and executed him with a gun before skinning and beheading him, according to the ZCTF. To make matters worse, Cecil was fitted with a GPS collar as part of a research project by Oxford University to track his movements, and the ZCTF claims that the hunters tried to destroy it. Two men from Zimbabwe were charged with poaching, since the hunters failed to secure a hunting permit.

It is not yet known if Zimbabwean authorities will levy poaching charges against Palmer, who says he was operating under the impression that it was a “legal hunt.”

“I relied on the expertise of my local professional guides to ensure a legal hunt,” he said in a statement on Tuesday. “Again, I deeply regret that my pursuit of an activity I love and practice responsibly and legally resulted in the taking of this lion.”

The unfortunate incident has led to an outpouring of support for Cecil, and contempt for Palmer—an online petition demanding justice for his murder has reached over 230,000 signatures and counting. It’s also revived the debate over big-game hunting in Africa, a practice that, while legal, many animal-rights activists are vehemently opposed to.

Which brings us to GOP presidential candidate Donald John Trump—or rather, his offspring.

Back in 2012, photos surfaced of the elder Trump’s sons, Donald Trump Jr. and Eric Trump, proudly posing with the carcasses of dead animals they hunted while on a big-game hunting expedition in Africa. The photos showed Donald and Eric posing with a lifeless cheetah, Donald clenching a knife along with the bloody, sawed-off tail of an elephant, and the pair posing next to a crocodile hanging from a noose off of a tree. 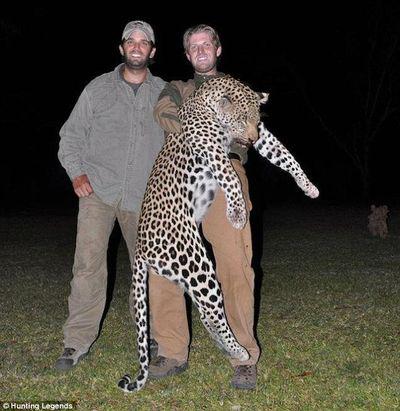 The Trump boys were hunting in Zimbabwe—the same country where Cecil was killed—and though Zimbabwean animal conservation groups looked into the incident, the hunt was deemed perfectly legal. Once the photos went viral online, Donald Trump Jr. tweeted (and then deleted): “Not a PR move I didn’t give the pics but I have no shame about them either. I HUNT & EAT game.”

Later, Donald Jr. clarified his thoughts on the big-game hunt in an interview with Deer & Hunting magazine in August 2012.

“I think what made it sort of a bigger story and kind of national and even global news was that I didn’t do what a lot of other people do, which is immediately start apologizing for what I am and that I’m a hunter and all this,” Donald Jr. told Deer & Hunter. “I kinda said, ‘No, I am what I am. I did all those things. I have no regrets about it.’”

“That really stirred the hornet’s nest,” he continued. “Because they’re used to these other guys, perhaps with slightly weaker personalities, just kowtowing to their calls and everything like that… If I’m in the right, I make sure I let people know it… I guess within the hunting community, a lot of people gave me some credit for that. It gave me more flack from the other guys but if they’re not gonna understand or they don’t choose to, I could care less.”

Donald Jr., who, along with his younger brother Eric, hold the position of executive vice president within The Trump Organization, also gave an interview to Forbes magazine in which he explained that he’d learned how to hunt at the age of 12 from his Czechoslovakian grandfather, and that Donald Sr. “really doesn’t understand why Eric and I hunt. However, he is open minded and so always allowed us to go hunting.”

“Anyone who thinks hunters are just ‘bloodthirsty morons’ hasn’t looked into hunting,” said Donald Jr. “If you wait through long, cold hours in the November woods with a bow in your hands hoping a buck will show or if you spend days walking in the African bush trailing Cape buffalo while listening to lions roar, you’re sure to learn hunting isn’t about killing. Nature actually humbles you. Hunting forces a person to endure, to master themselves, even to truly get to know the wild environment. Actually, along the way, hunting and fishing makes you fall in love with the natural world. This is why hunters so often give back by contributing to conservation.”

Trump Sr. made it clear that he did not believe in hunting. “My sons love hunting. They’re hunters and they’ve become good at it,” he told TMZ. “I am not a believer in hunting and I’m surprised they like it.”