How to Vegan DISCOVER THE ART OF PUBLISHING
Home other Danny Trejo: Kicking Ass and Making Vegan Tacos

When people think Danny Trejo, they absolutely think cuisine. Namely, whom he’s eating for breakfast on any given day. That’s called badass gastronomy. And off screen at the craft table Trejo and his Bad Ass film franchise producer Ash Shah digested over food talk and became business partners in a wholly different kind of enterprise. Enter Trejo’s Tacos, which announced the opening of its first location in the Mid-Wilshire area of Los Angeles in March, currently executing and serving Trejo’s vision of locally sourced, made to order Mexican.

“We wanted to take care of everybody,” said Trejo. “Our tacos at Trejo’s Tacos are all organic—everything is fresh and made with love.”

From conceptualization by Trejo and his culinary team, the motley taqueria menu fell into the hands of Chef Ramses Walker, formerly focused in the hospitality industry and as Executive Chef at Café Sevilla. Walker keeps a keen eye on locally sourced ingredients, shipping in the red quinoa for the subtly coconut-flavored Danny’s Super Rice from Sonoma, for instance, and keeping the menu light and lean.

And if you hightail it to Trejo’s Tacos still under the impression that it’s a vegetarian restaurant, don’t fear. Trejo gets you.

“As an actor a lot of times after a meeting there will be six or seven of us going out to get some dinner and inevitably someone will be gluten-free or vegan,” said Trejo. “So we made sure the restaurant had vegan and gluten-friendly options.” L.A.’s plentiful vegans, vegetarians, and fad dieters have options like the Black Pepper Tofu taco, Organic Street Corn, and Date Sweetened House Made Horchata, to name a few.

If you’ve ever wondered what it takes to make a man a Machete, try the Fried Jidori Chicken taco served on a lettuce cup or the Grilled Mexican White Shrimp Tostada with citrus wedges and cherry tomatoes. But if you equate manliness with gut-buster burritos and tortillas bleeding red grease, you might be surprised to find that the fare at Trejo’s leans toward the delicate.

“We want everybody to get full without getting the itis,” said Walker. 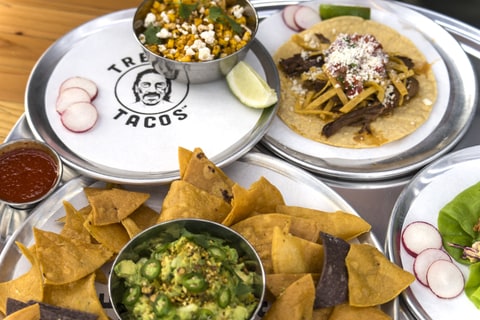 One could almost imagine Trejo’s as more of a gastropub, small plates joint, with individual tacos priced around four bucks, modestly sized sides, and a mixed crowd of hipsters, socialites, and hardcore Trejo fans in attendance. While you can get a dollar taco from the trucks that roost on almost every street corner in Los Angeles, Trejo’s Tacos is not that kind of taqueria.

Though the menu toes the higher end of the dollar scale, on a Tuesday afternoon just ahead of the lunch hour a line had wrapped itself around the modestly sized modern building housing the restaurant. Patrons greeted by an attendant at a souvenir booth stocked with Trejo’s Tacos t-shirts, sweaters, and tchotchke waited their turn to order and claim space on the picnic benches outside.

“Having a restaurant was always my mom’s dream,” said Trejo. “She was a great cook. If there’s one thing I learned from her it’s that to make great food, you’ve got to use the best ingredients.” 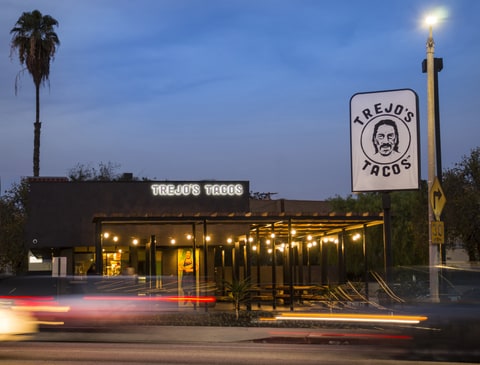