How to Vegan DISCOVER THE ART OF PUBLISHING
Home other Berlin: Vegan capital of the world?

Berlin has become a haven for vegans, with specialized restaurants, butchers and even sex shops. And although veganism is about protecting animals and the environment, being vegan in Berlin is so much more.

Move over Portland – there’s a new vegan champion on the block.

With more than 50 exclusively vegan eateries, and ever more restaurants and cafés there offering vegan options, Berlin is gaining a reputation on the international vegan scene. Because the city is still relatively cheap, eating out vegan – once a struggle – has become a dream.

But being vegan is not just about what you eat. It’s a whole lifestyle – one that Berlin is at the forefront of.

In Berlin, vegans can find restaurants, clothing, sex shops and other products that satisfy their strict dietary and lifestyle requirements.

And in the German capital, veganism is in. Along with the 80,000 vegans now estimated to live in the city are butchers, singles nights and fast food restaurants – all part of a movement.

That movement is continuing to grow – sometimes, a bit too quickly. Earlier this year, police were called in to break up a huge crowd at a new vegan diner that opened in Berlin’s hip Neukölln district.

“It’s certainly fashionable. If you really want to be cool in Berlin, you’ve got to be vegan,” Sebastian Joy of Vebu, Germany’s largest vegetarian and vegan organization, told DW. 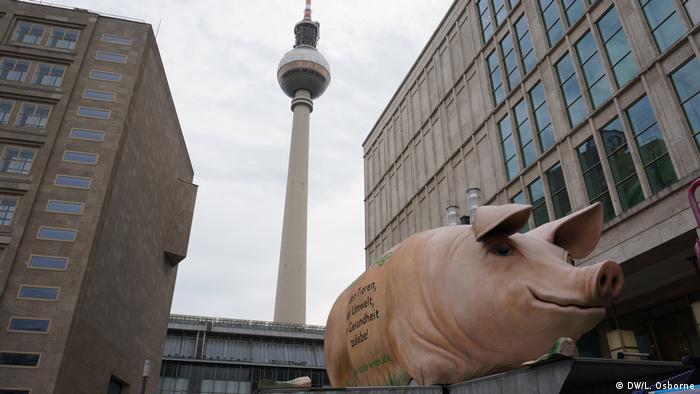 Berlin – the new capital of vegan?

While once it would have been lucky to attract just a few hundred visitors, a recent vegan summer festival organized by Vebu in Berlin attracted a crowd of some 60,000 people.

Ever more organizations are helping people question their choices when it comes to animal rights, explained Joy.

“Once you have enough of that, it becomes easier for people to go vegan. It’s like a self-reinforcing development that we have triggered here in Berlin,” he said.

Vegans don’t just stay away from meat. They avoid all animal products, for example milk-based foods or eggs. The rights of animals is a main motivation – though not the only one.

People are increasingly choosing not to consume animal products because they’re more aware of the impact it can have on the environment, said Joy. According to the United Nations, the animal agriculture sector accounts for about 15 percent of manmade greenhouse gases.

“Whether it’s for health or for the planet, the environment, the climate, animals or world hunger … there are dozens of reasons, so just taking the first step to reduce your consumption is a huge step forward,” he said.

Many vegans also avoid animal products like leather and silk when choosing clothes and shoes.

But the ideals that lead people to make these choices about animals also encourage them to seek products that tick other ethical boxes.

Christina, the owner of a vegan clothing shop in Berlin, says that although clothes from chain stores like H&M can be vegan, they may not satisfy the requirements of many of her customers.

“The problem is that textile production also has its bad side. For many of our customers, it’s important that the clothes are vegan, but also that no child has suffered or that the environment wasn’t harmed,” she told DW.

Being vegan is a choice that permeates almost every aspect of life, from speed dating to the bedroom.

At Other Nature, an alternative adult shop in the Kreuzberg district, a special range of vegan sex toys, vibrators and lubricants are on offer. This means no leather – or latex, for that matter, which often contains milk proteins.

Cat, who works at the shop, is a vegan herself. She explains the market for these products, which she says goes beyond being simply a lifestyle.

“People ask, ‘Why are you vegan?’ I really like that,” she said. “Most people aren’t aware that condoms are not vegan. However, we need condoms – everyone needs condoms for safe sex.”

For many, it seems, going vegan is about adopting a completely different way of life. Yet veganism is not as rigid as it once was, explained Sebastian Joy. 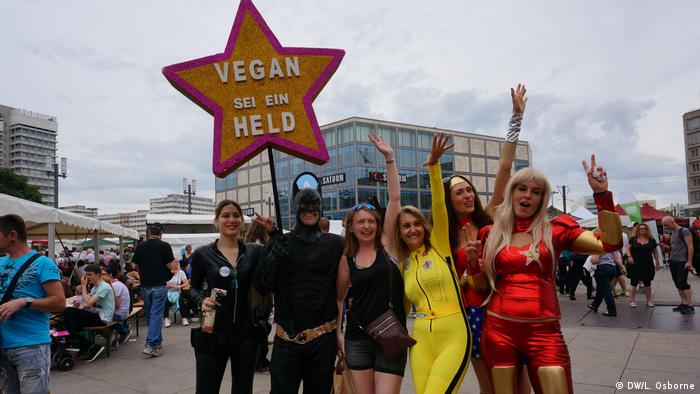 For these “vegan heroes,” lifestyle choices are about more than food

“More and more people say, ‘Well, you know, I’ll do what I can’,” he said. “I’ll be a vegan before 6 p.m., or a home vegan, and sometimes when they’re out they might eat animal products. I think that’s what’s really pushing the vegan movement forward.”

There are many different reasons that people are choosing to move their diets closer to being vegan, if not going committing entirely to the lifestyle. Well-being, for example, seems to be playing a bigger role for some people, among them Anna.

“I’m interested in health – that’s perhaps my main focus,” she told DW. “I haven’t been dogmatic, but I’ve just moved closer [to veganism].”

For others, the sacrifices involved are just too much. Although his girlfriend is vegan, Markus said there are things he just can’t give up. “I don’t drink milk, but I like cheese so much that I haven’t been able to change to alternative products. I’d like to be vegan, but I just can’t.”

Still, whether people are choosing to be fully vegan or not, there’s a growing understanding in Berlin that what we eat or not has direct consequences for the environment.