How to Vegan DISCOVER THE ART OF PUBLISHING
Home Health Aquafaba Recipes: 10 Tasty Things You Can Make With Chickpea Water

A “new” egg replacement is exciting the vegan community, as well as allergy-friendly food enthusiasts. It’s called Aquafaba, coined by its American founder, Goose Wohlt. And the reason it’s not entirely new is because it has probably been a staple in your pantry for years.

Aquafaba literally means “bean water” — the water that beans are soaked in. Aquafaba is found in cans of chickpeas, but can easily be made by soaking and boiling dried chickpeas, and collecting the bean water.

In late 2014, a French blogger named Joël Roessel experimented with liquid from chickpeas and palm hearts to substitute eggs in meringue cookies. And after further experimentation, Wohlt, a vegan baker, discovered that chickpea liquid alone can be used as an egg substitute to make vegan meringues that are identical in taste and texture to traditional egg-white meringues.

Since Wohlt’s discovery in Feb. 2015, the egg-free community has exploded with aquafaba experimentation. A growing international community has developed around aquafaba to explore its full potential, resulting in many exciting recipes.

Here are 10 delicious things you can make with aquafaba:
1. Egg replacer in baking 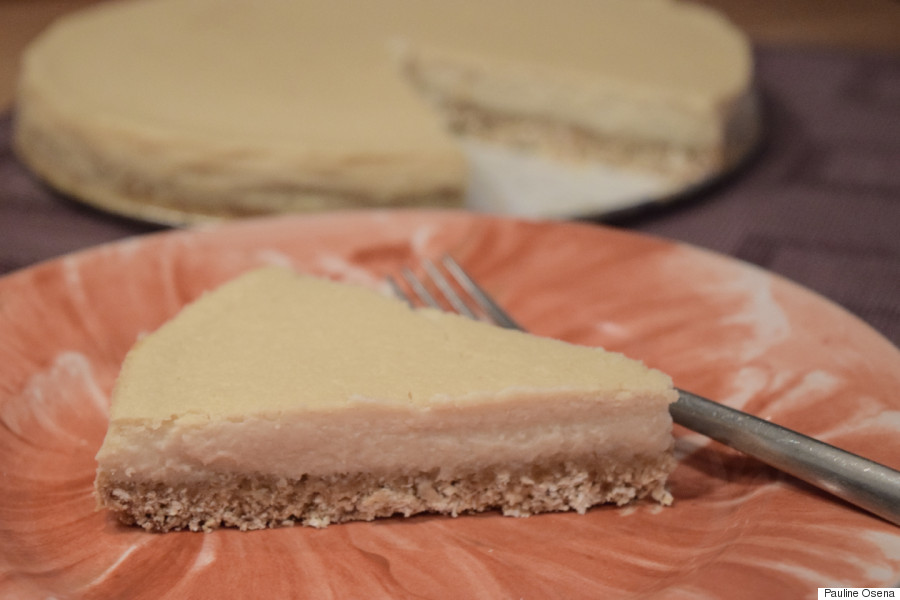 You only need three tablespoons of aquafaba to replace one egg in most recipes. It works best in recipes where eggs are used as binders, such as cookies, brownies and cakes like this delicious allergy-friendly cheesecake. For optimal results, aquafaba should not be used to replace more than three eggs in a recipe.
2. Vegan meringue cookies 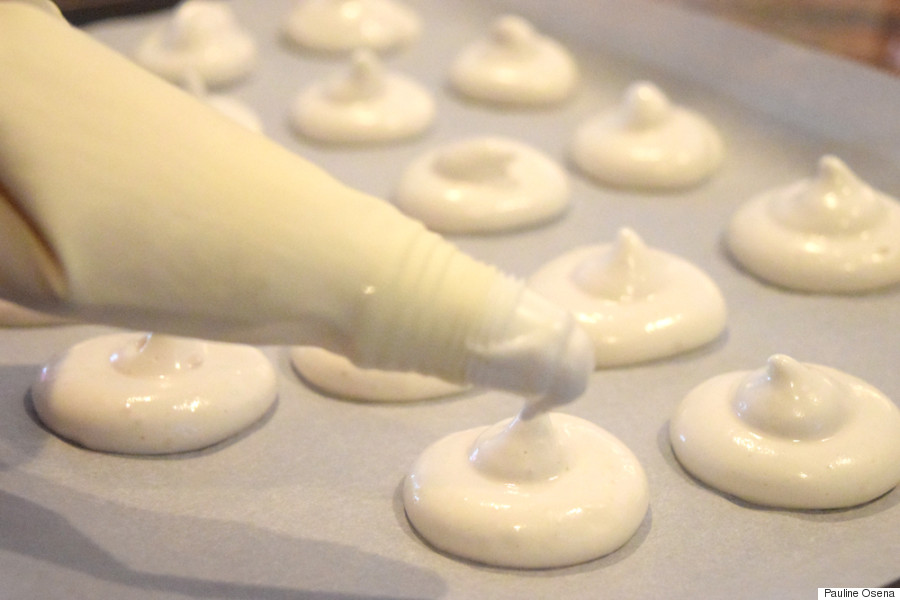 Aquafaba was discovered in the quest to make the perfect vegan meringue cookie, which is traditionally made with egg whites and sugar. To make egg-free meringue cookies, use an electric mixer to whip aquafaba with sugar. In just minutes, the mixture becomes stiff and forms peaks. This whipped aquafaba can be piped directly onto a baking sheet and baked at low heat for about two hours. Get the recipe here.
3. Dairy-free ice cream 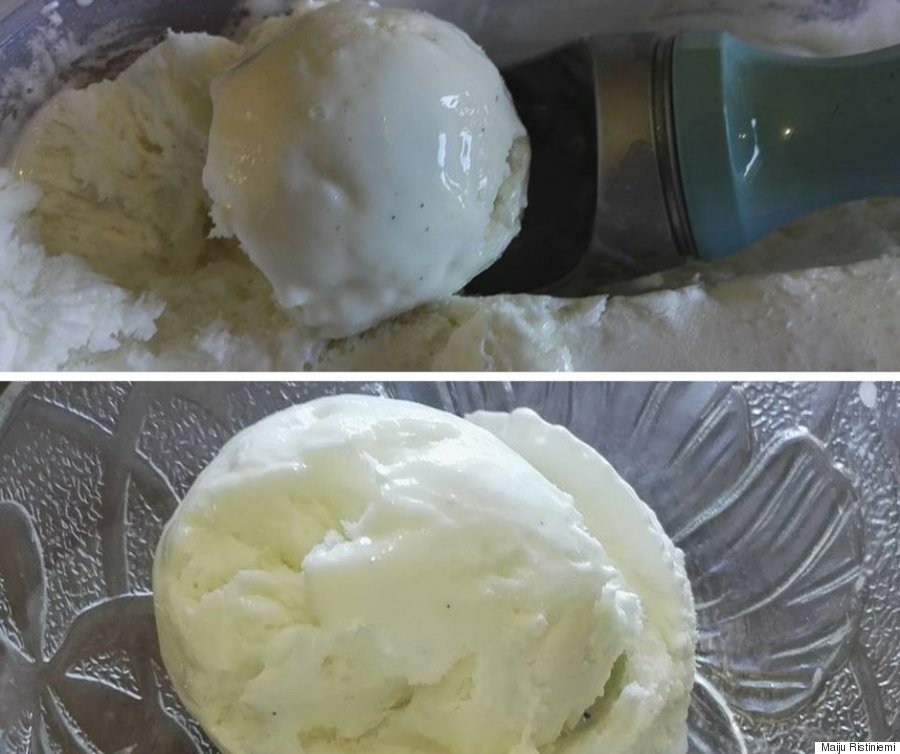 One of the biggest challenges with dairy-free ice cream is that lower fat milk alternatives can result in ice cream that’s icy and hard. But using whipped aquafaba in dairy-free ice cream helps make the final frozen product creamy and soft like traditional ice cream. The best part is you don’t even need an ice cream maker! Maiju Ristiniemi from Finland shares how she made soft coconut aquafaba ice cream, here.
4. Egg-free mayonnaise 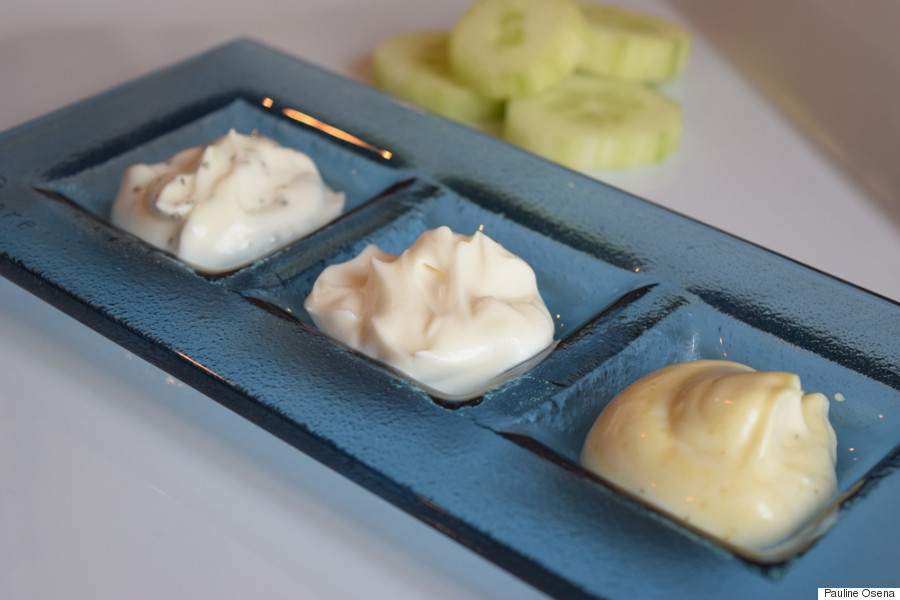 To make a delicious and creamy egg-free mayonnaise, simply replace the egg yolk used in traditional mayonnaise with three tablespoons of aquafaba, and whisk it with lemon juice and olive oil. Aquafaba mayonnaise can be seasoned and used as salad dressing, a dip or anything else traditional mayonnaise is used for. It does not separate and keeps fresh for up to one week refrigerated in an airtight container. Get the recipe here.
5. Dairy-free butter 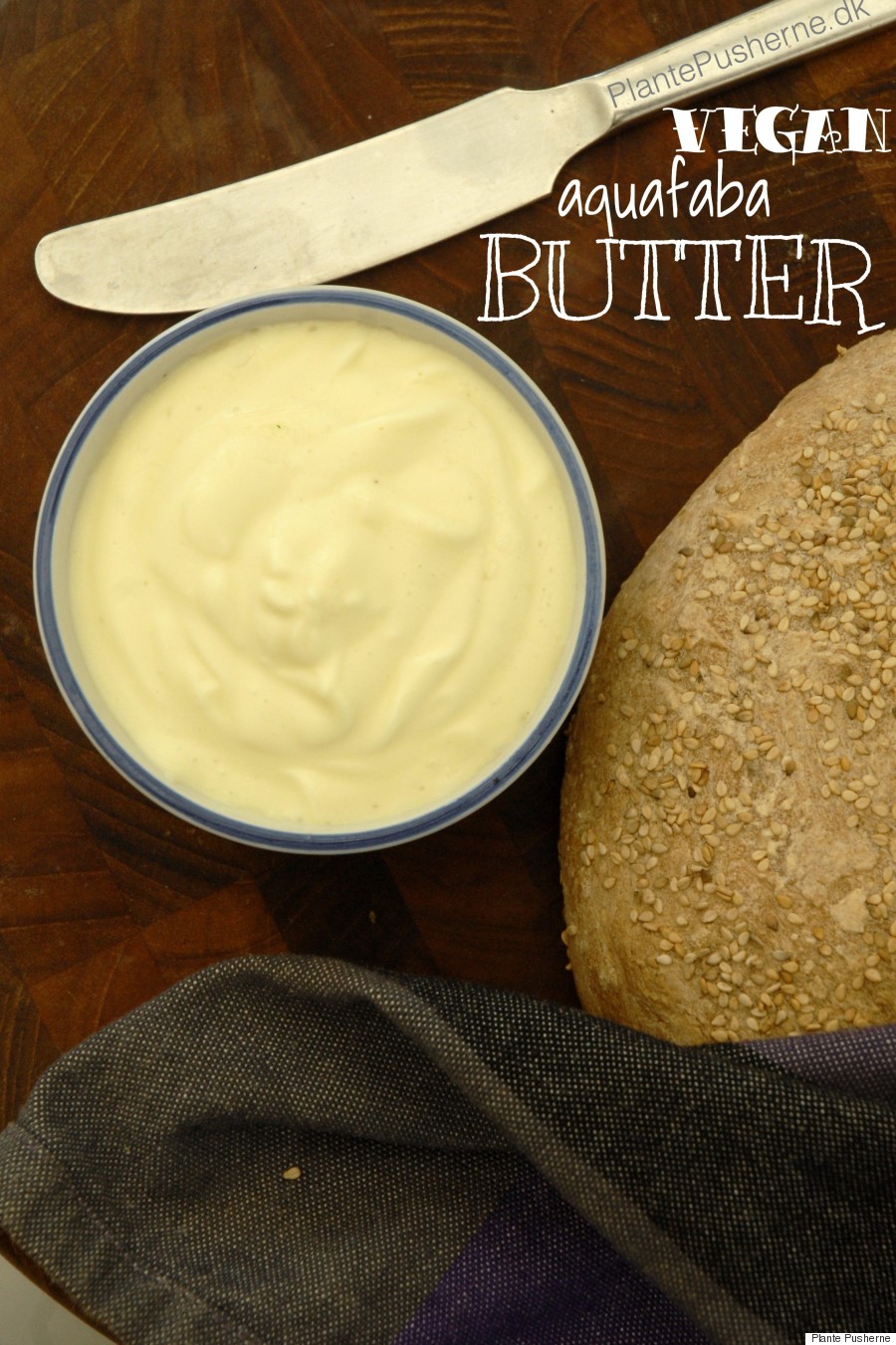 A dairy-free butter can be easily made with some aquafaba, coconut oil, olive oil, apple cider vinegar and salt. Nina, of the blog Plante Pusherne, uses simple ingredients and four minutes of processing time to whip up a delicious and buttery soft, vegan aquafaba spread. Get the recipe here.
6. Soy-free vegan cheese 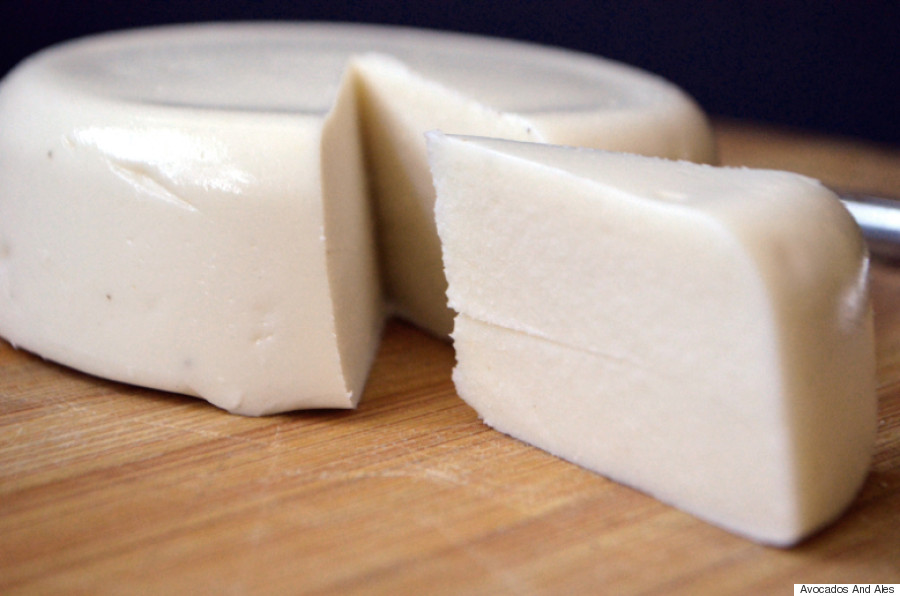 Aquafaba can be used as an emulsifier for vegan cheese in place of soy lecithin. This mozzarella aquafaba cheese recipe by Lacey, of the blog Avocados And Ales, is made with raw cashews, and it melts and stretches just like traditional cheeses. Get the recipe here.
7. Vegan royal icing 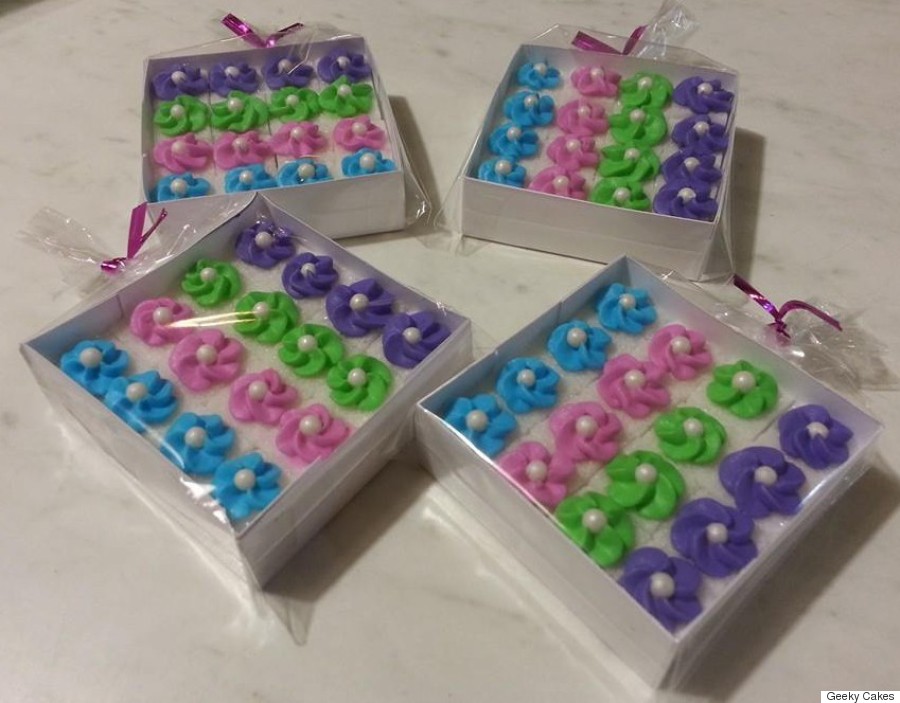 Royal icing is a hard icing traditionally made from confectioner’s sugar and egg whites. It’s used to decorate cookies and cakes, and to glue together pieces of gingerbread houses. Linda, of the blog Geeky Cakes, makes an egg-free royal icing by replacing the egg whites with aquafaba. Royal icing decorations can be piped onto waxed paper and dried. Once fully dried, these royal icing decorations (that are free from top allergens) will keep indefinitely if stored in an air-tight container. This is a great short cut, as you can have allergy-friendly decorations at a moment’s notice. Get the recipe here.
8. Vegan marshmallows 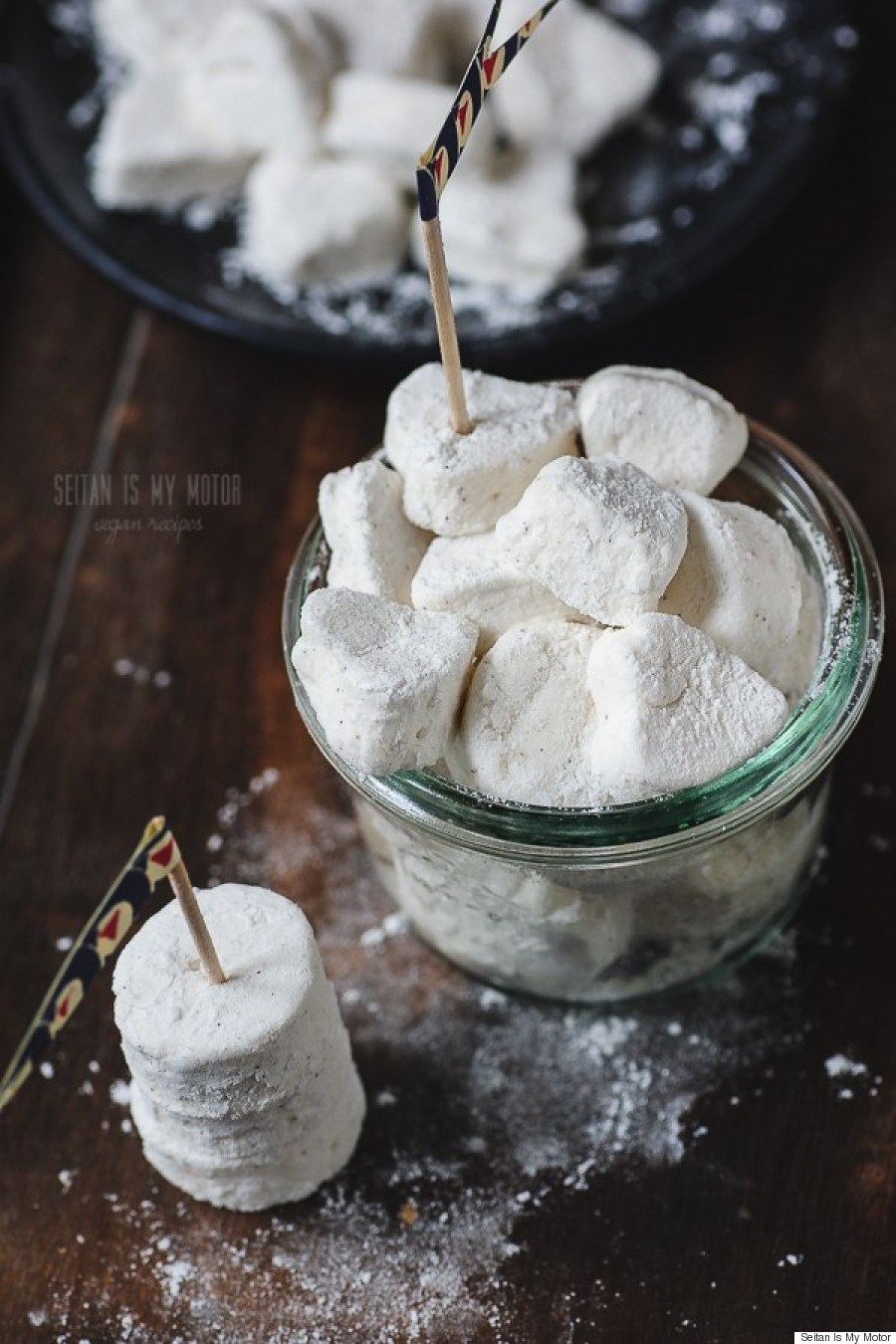 Marshmallows are spongy confections typically made with sugar, water and gelatin, and coated with cornstarch. They can also be made with eggs. Constanze (Mihl), of the blog Seitan Is My Motor, makes egg-free vegan marshmallows using aquafaba to replace the egg white, and agar powder to replace the gelatin. The result is soft and moist marshmallows that can be roasted to perfection! Get the recipe here.
9. Vegan macarons 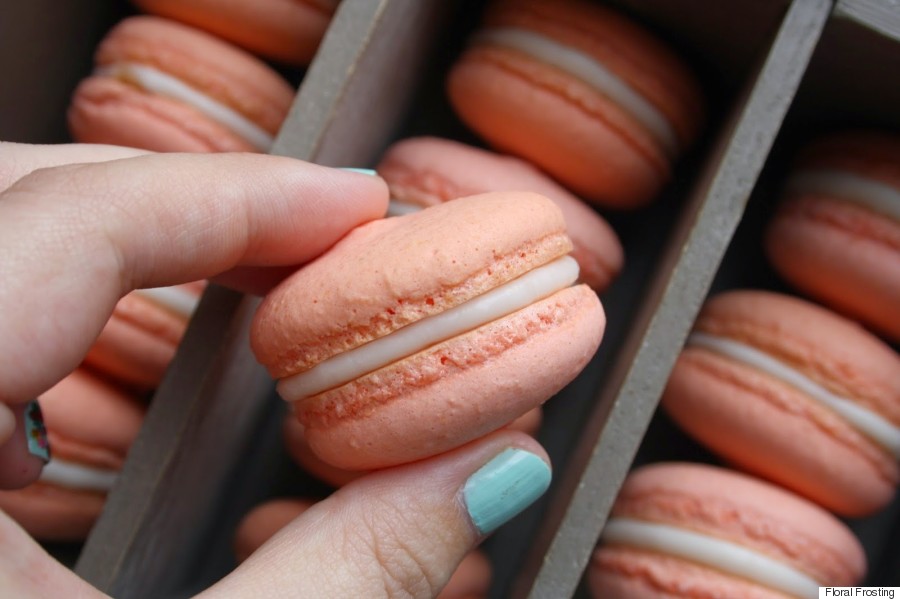 Macarons are sweet meringue-based confections. Ganache, buttercream or jam is sandwiched between two cookies made with egg white, icing sugar, granulated sugar, ground almond and food colouring. Charis, of the blog Floral Frosting, makes vegan peaches-and-cream macarons by replacing the egg whites in the cookies with aquafaba that is reduced and then whipped until fluffy. The mararons are then assembled with a dairy-free filling. Get the recipe here.
10. Vegan lemon meringue pie 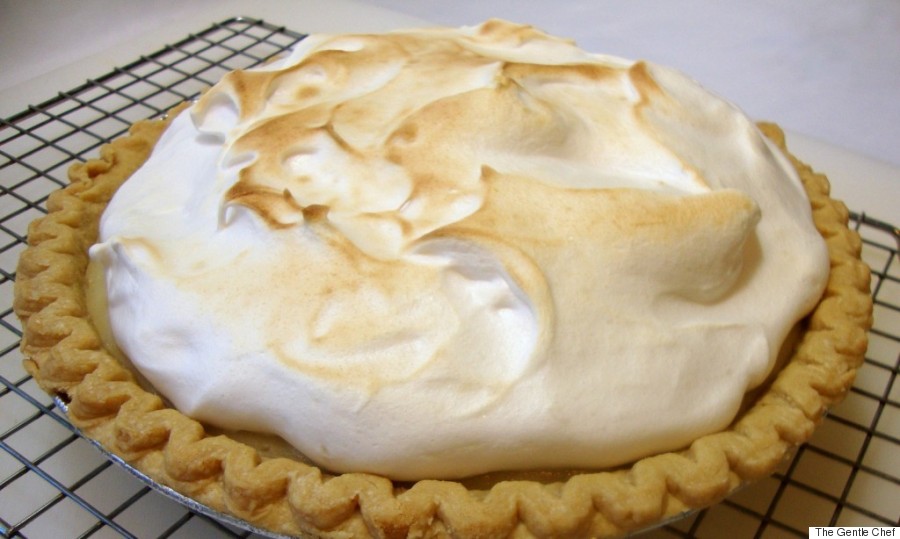 Lemon meringue pie is traditionally made with a shortcrust pastry crust that is filled with lemon custard and topped with fluffy meringue. To create a vegan lemon meringue pie, chef Skye Michael Conroy of The Gentle Chef made the lemon custard with silken tofu, cornstarch, sugar, lemon juice and zest, and the meringue with aquafaba, sugar and guar gum using the same whipping method as meringue cookies. Get the recipe here.

Pauline Osena is a food allergy advocate and founder of HypeFoodie.com, an online resource for allergy-friendly living. This former dairy junkie became an expert in allergy-friendly cuisine while figuring out how to feed her child with multiple food allergies. Pauline aims to inspire culinary adventures and experimentation with her series, “An Allergy-Friendly Makeover,” and shares the valuable knowledge she has gained from her trials, errors and adventures in living with food allergies with “The Allergy-Friendly Top 10.” Pauline’s short-term goals include getting a full night’s sleep and drinking her entire cup of coffee while hot.