A lot of people seem to think veganism = leaves all day every day.

Which makes a lot of people think eating vegan food is a lot harder than it is.

But the fact is, veganism is good for the planet, good for animals, and ACTUALLY CAN BE VERY TASTY!

So we asked the BuzzFeed Community to tell us their most delicious vegan recipes. Here are the results. (Spoiler alert: VEGAN MAC ‘N’ CHEESE EXISTS.) 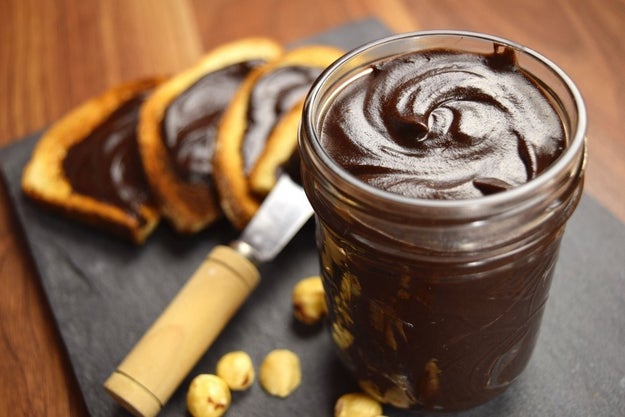 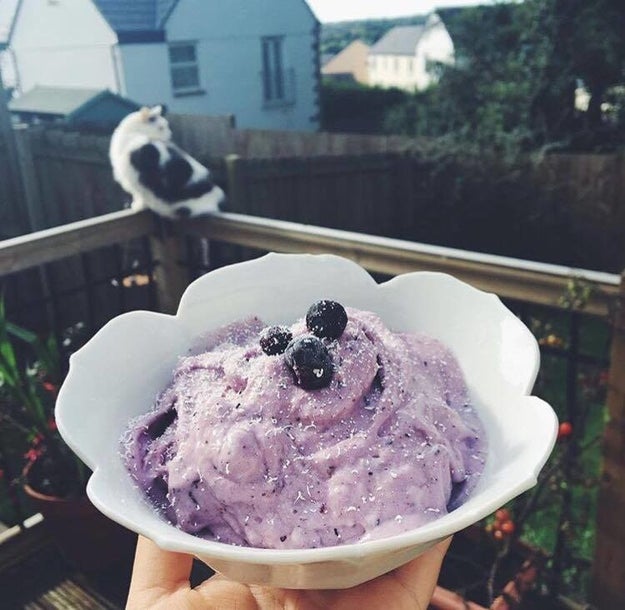 “Just frozen bananas whizzed up with frozen blueberries, a little bit of coconut milk and a drop of maple syrup if you like a bit of extra sweetness! Cacao butter sprinkles and a couple of blueberries on top – it’s my go-to breakfast for sunny mornings. 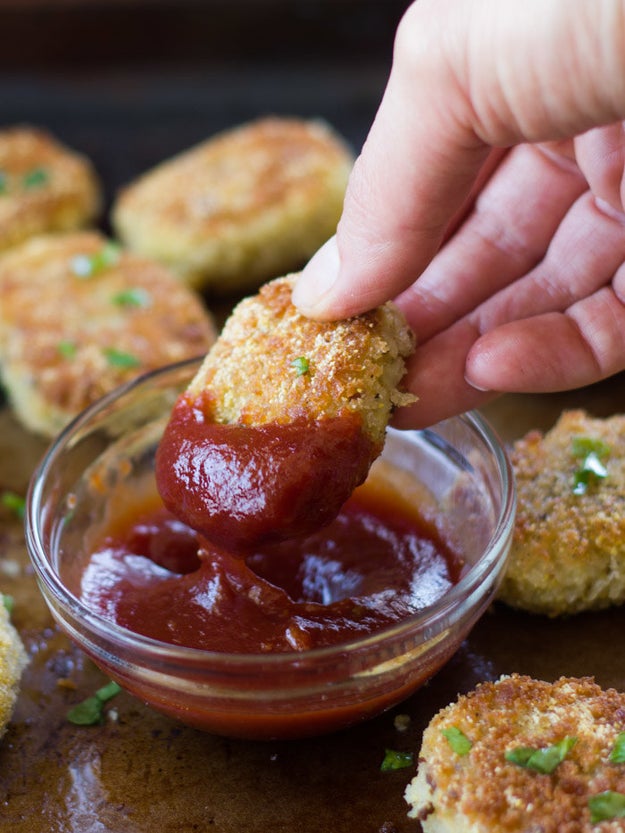 “These are arti-chicken nuggets. After being a junk food/convenience vegan I was determined to eat something super healthy because I was getting fat from all the baking and sitting down on the computer writing about all the baking.

But I also fancied something stodgy that would stick to my stomach and make me sleepy and full. Enter arti-chicken nuggets. (Recipe adapted from Connoisseurus Veg)” 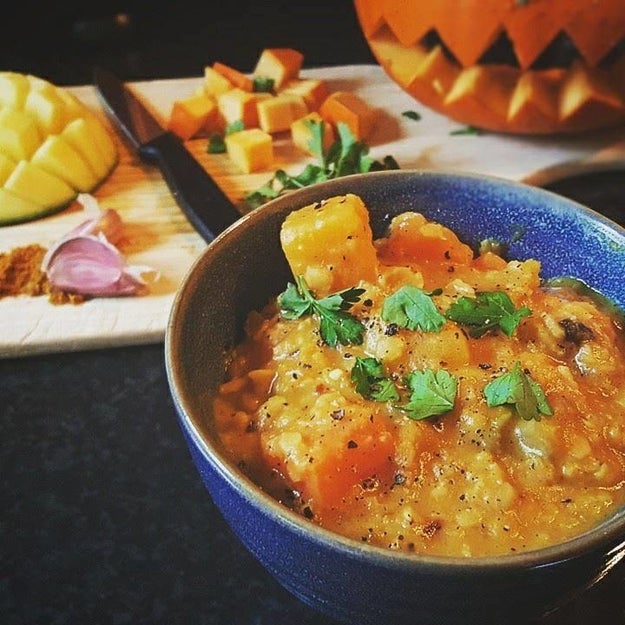 “I absolutely love this recipe because it’s so warming and nourishing! The balance of sweet potato, silky coconut and fragrant Indian spices give you that cosy feeling! Perfect for a chilly winter’s night!” Recipe here. 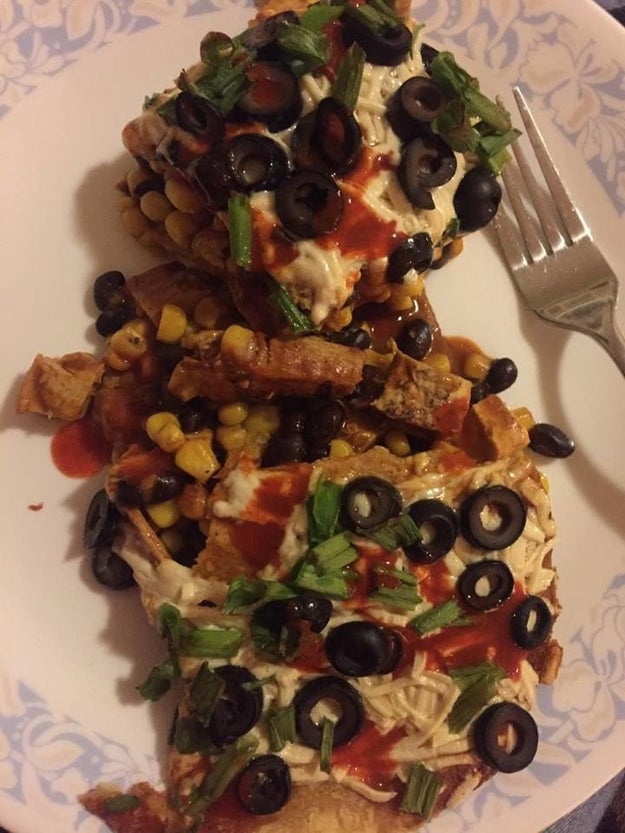 “In the bottom of a glass baking pan, layer mini corn tortillas, Trader Joe’s* enchilada sauce, chopped Beyond Meat Southwest Style Strips (chickn)*, and corn and beans mixed together with salt and pepper (diced onion if you want). Add another layer of sauce, tortillas, and repeat. Top with mozzarella Daiya, sliced black olives, and green onion. Bake at 350°F for about 30-35 minutes.
Best thing ever!”

*Or any enchilada sauce/vegan meat substitutes will do 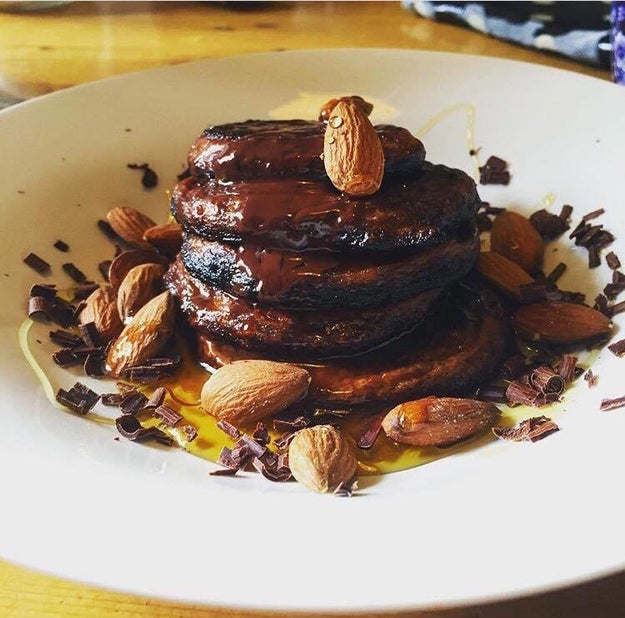 “Mix a banana, one cup of soya milk (or any plant milk), two tablespoons of ground almonds, a half cup of oats and a tablespoon of cacao together, and leave the mixture to stand for 10 minutes. Grease a frying pan and dollop on, then allow each side to cook for about five minutes, or until brown.

“They look complicated but they are so easy! You just mix everything together and then cook. Really simple and tastes amazing!” 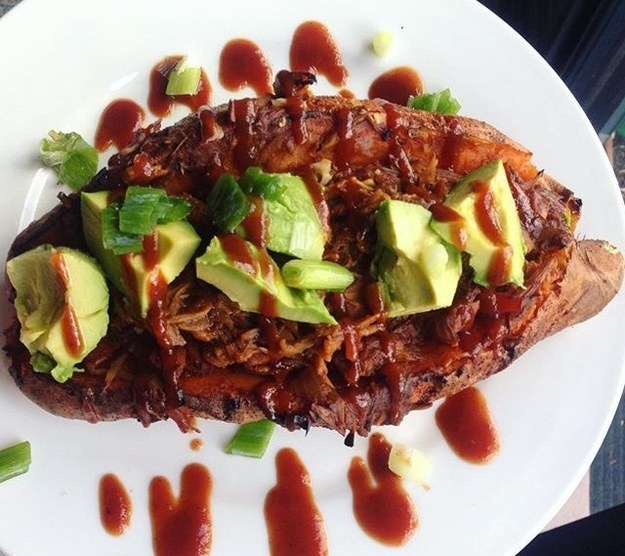 “Roast your sweet potatoes in an oven with some olive oil, salt, and pepper. While they’re roasting, drain your jackfruit, and mash up with a fork. Fry in a pan with the oil and spices. Add your veg stock, liquid smoke, maple syrup, and BBQ sauce. Add as much BBQ sauce as you want, depending on how saucy you like it, then simmer for about 15-20 minutes. When your potatoes are golden on the outside, top with jackfruit, avocado and spring onions. Drizzle on some more BBQ sauce, and that’s it!” 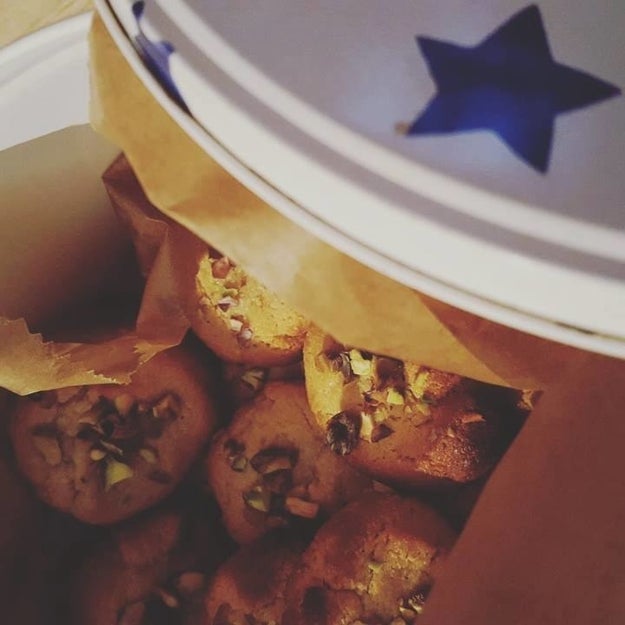 “These pistachio, maple, and tahini cookies are the perfect snack for an energy boost, and so simple to make with few ingredients! The recipe I use is by The Yoga Kitchen.” 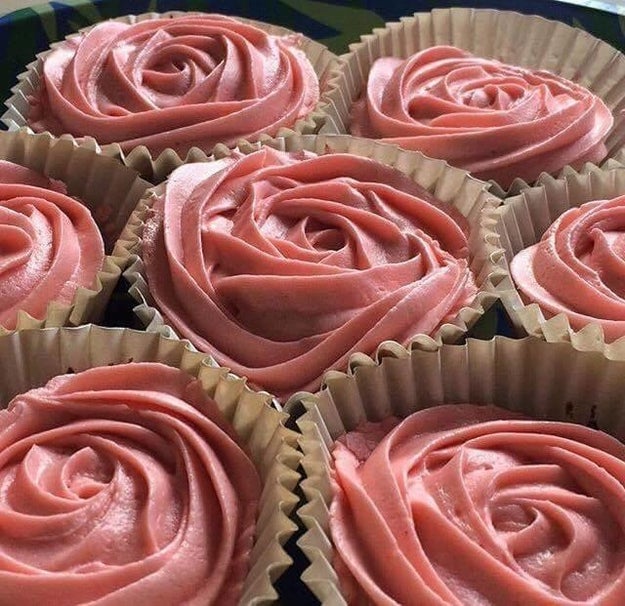 “These are cupcakes to convert the unbelievers! Follow a normal cupcake recipe, but just sub in your choice of egg replacer, and vegan margarine for the butter.”

“I love to make a good, chunky, garlicky hummus and pour it on top of fresh baked tater tots! The hot crunchy tater tots combined with the cool, creamy hummus is amazing!

“This also works with homemade oven fries if you don’t have tater tots.”

“Avocados, balsamic, coconut oil, soy sauce (Nama shoyu if you want it raw), cocoa powder, agave nectar, stevia, and maple syrup. Blend in a food processor and you’re done. Balsamic and soy sauce may seem weird but all it will do is cut the taste of the avocado and intensify the chocolate. All you’ll get from the avocados is the creaminess. No weird flavours.” 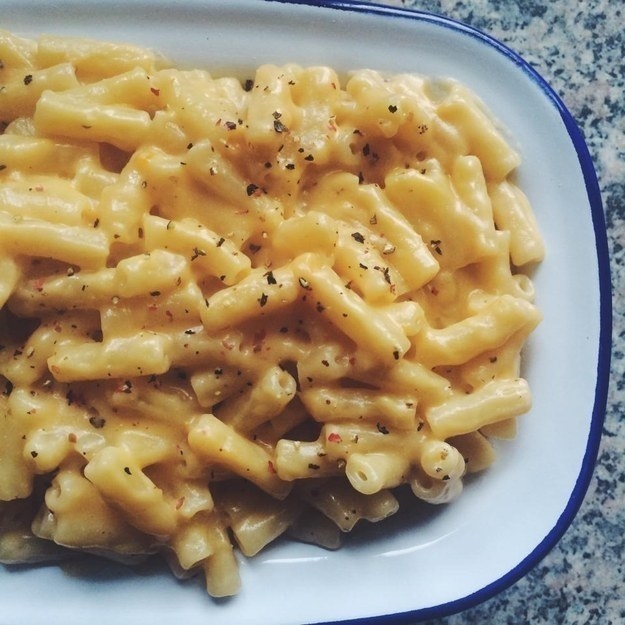 “Macaroni ‘n’ cheese was always one of my favourite comfort food dishes growing up and I was delighted when I discovered vegan mac ‘n’ cheese! The sauce in the one I make is made from Violife cheddar, homemade cashew milk, a little bit of coconut oil, Himalayan salt, and cracked black pepper. So simple, beautifully creamy, and non-vegans love it too!”

“You can use jackfruit instead of pork in a BBQ pulled pork… it’s crazy good and has a similar taste and texture to the pork. Confirmed meat eaters (including myself) love it!”

“Tofu laksa (coconut broth). Make a marinade for the tofu using dark soy sauce, peanut butter and thai green curry paste. I use the curry paste in the laksa too instead of red. It’s amazing! Cut the tofu into fingers and shallow fry it.” 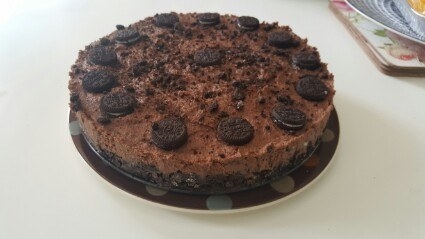 “My Oreo ‘cheesecake’ is completely vegan. I make this every year for my mum’s birthday. It’s really easy to put together and tastes delicious. Nobody can ever tell it’s mainly made from silken tofu.”

“I make the meanest vegan Philly cheesesteak. You grill eggplants, onions, jalapeños, and/or bell peppers, chop them all up once they’re done, make a heap, add vegan cheese (or no cheese) on top, and let melt. When melted, take toasted hoagie bun, lay open over the heap, and scoop up the goodness with the bread. Done!” 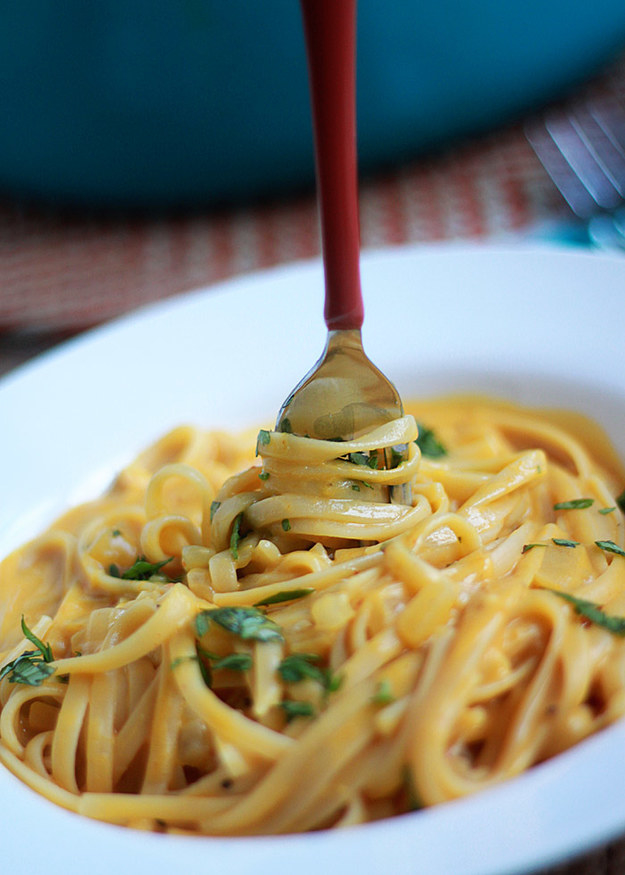 “Creamy vegan pumpkin pasta, made with coconut cream. I add pumpkin pie spice to make it taste even more like autumn in a bowl.” Recipe here. 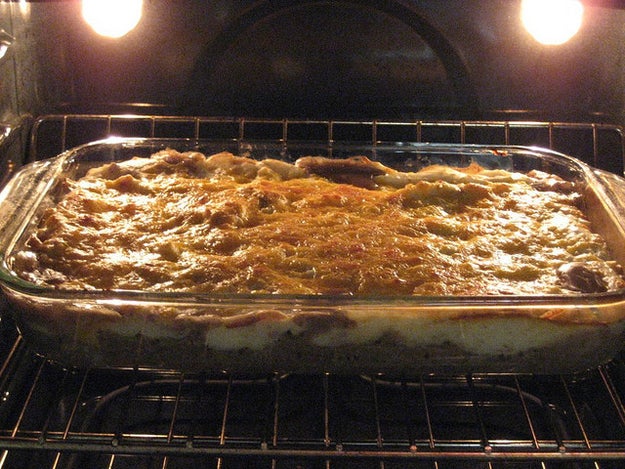 “Fry a medium white onion in oil until almost clear, then add ground vegetables and cook through. Pour into a rectangular casserole dish and pour gravy over the mixture. Now make a criss cross squiggle pattern in ketchup over the gravy mix. Spread peas and corn on top, add another ketchup grid, then spread a layer of potatoes over this. Dust with paprika then bake at 450°F for 45 minutes, or for one and a half hours if you’re baking from frozen.” 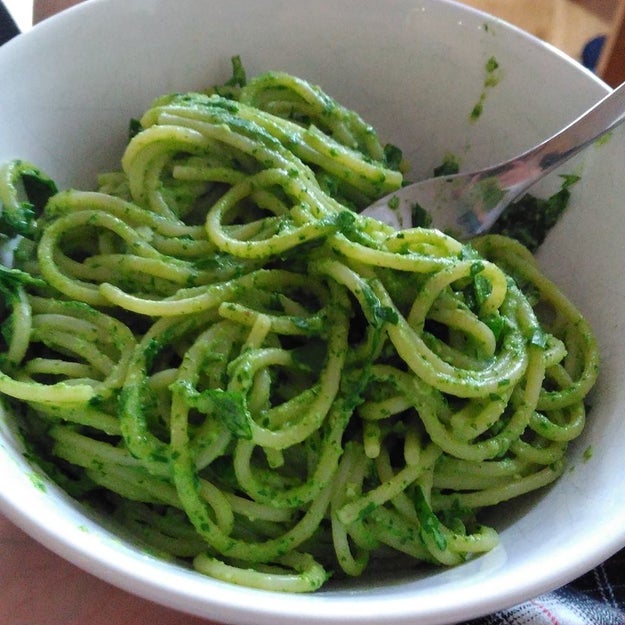 “There are vegan jars of stuff now but I used to make this with loads of basil, garlic, toasted pine nuts and some avocado for creaminess.” 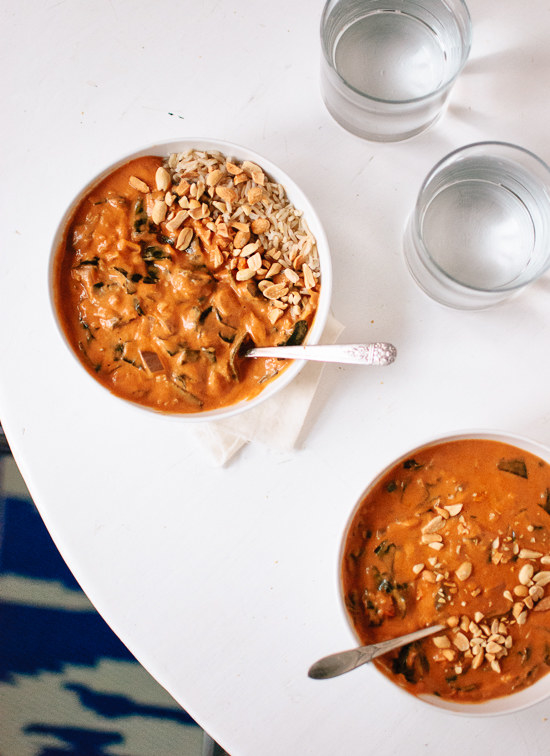 “As a carnivore I rarely eat vegan or even vegetarian dishes, but I have one dish I make on a consistent basis that is filling and delicious! Aloo gobi matar, otherwise known as potato, cauliflower, and peas roasted then cooked in a turmeric sauce with onion, ginger, garlic, and tinned diced tomatoes. Its super easy for a quick meal, too!” 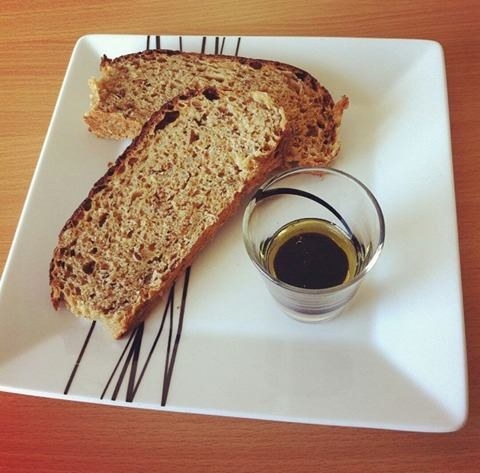 “Almost all shop-bought bread is vegan, but once you start making everything else from scratch, you realise you can make anything, get a bit over-excited, and start producing fresh bread for the house every other morning!” 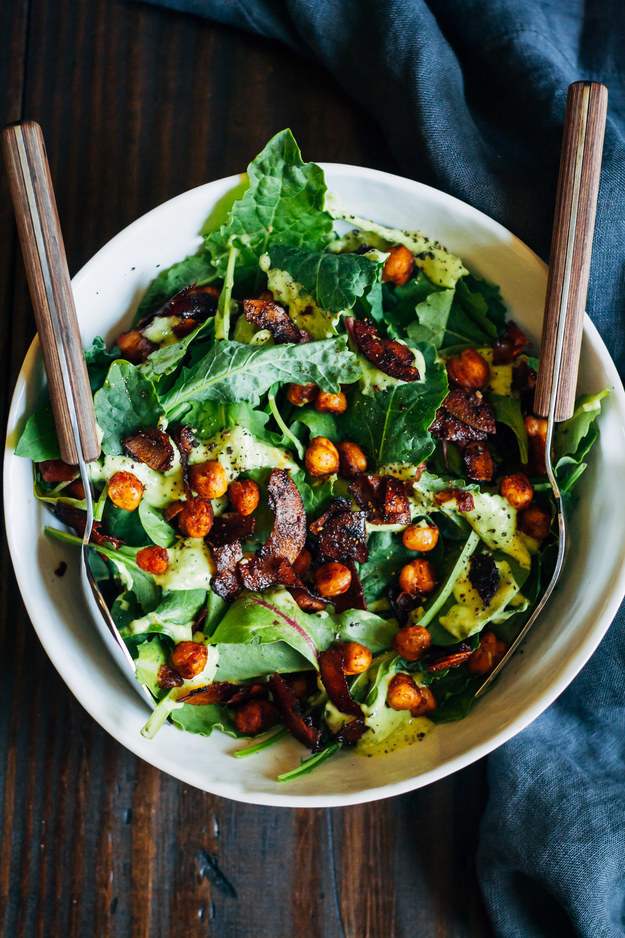 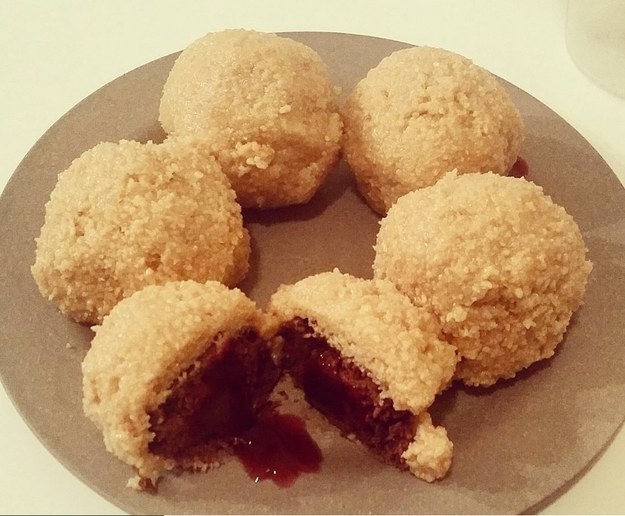 “Raw banana, chocolate, and coconut balls filled with cherries and cherry jam covered in homemade vegan marzipan. One of these can satisfy the biggest sugar craving you’ve ever had and it’s still healthy-ish.” Recipe here.

“We use seitan, zucchini, mushrooms, and spinach. To replace the lasagna noodles we use smashed spaghetti squash and rather than ricotta we use whipped up cashews and almond milk.” 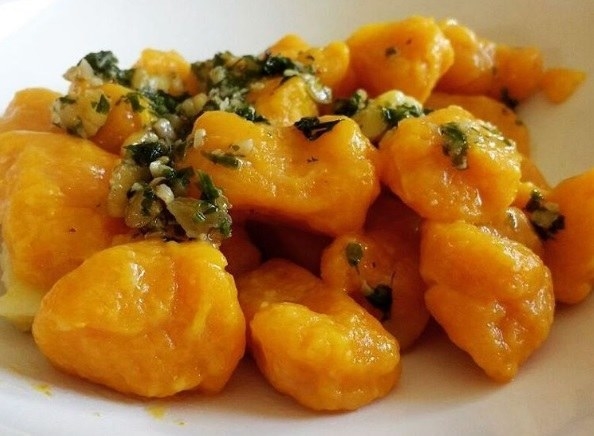 “I have made literally so many vegan dishes! But these vegan pumpkin gnocchi were just…amazing!”

“First, cut up some sweet potato into 3/4-inch cubes, toss in olive oil, cumin, chilli powder, garlic powder, salt, pepper, and cayenne if you’re daring. Toss them in the oven on a sheet pan at 400°F until soft.

“Next, dice up an onion and saute it in olive oil over medium heat. Add minced garlic and cook until soft. Add two cans of undrained black beans, gallons of oregano, salt, and pepper. Simmer for 10 minutes.

“Rinse and rip up some lacinato (Tuscan) kale (or regular kale, but lacinato has an unbeatable flavour!). Toss into the bean mix to wilt, or stick in the oven on top of your almost-done sweet potatoes. Finish by spooning some of the black bean mixture into a corn tortilla or taco shell, and topping with roasted sweet potato. Add whatever toppings you like – salsa, avocado. And if you need to feed non-vegans, some cheese or sour cream will make them happy, too!”