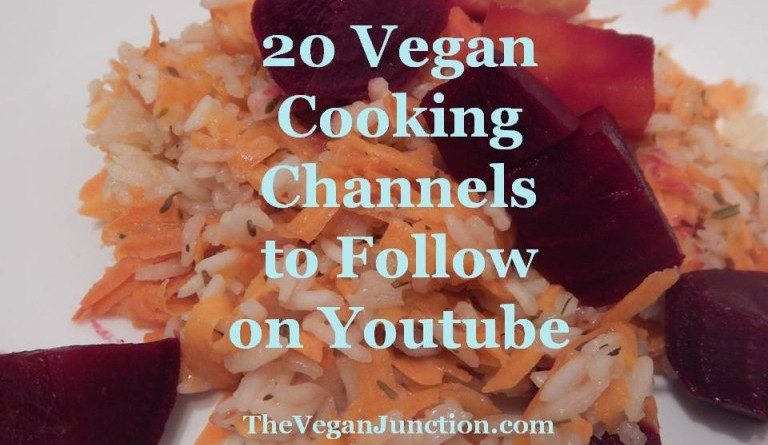 How would you like to have fun in the kitchen? Many people feel overwhelmed, or underwhelmed as the case may be, when they transition to a vegan diet. Either they don’t know what to eat, or they feel they need to eat certain foods and that’s all there is. Often people think vegan food is boring, tasteless, or just out-right gross. Well, it doesn’t have to be that way. You don’t need to eat obscure, unappealing foods. You can enjoy your meals. All you need is someone to show you where to start. Someone to help make vegan cooking exciting.

Whether you want ideas for new creations or to make better versions of old favourites, look no further.

Let these vegan chefs inspire and help you to prepare enticing vegan meals that are full of flavour. You’ll likely find something to suit you in this diverse selection of Vegan Cooking (and raw vegan) Channels to follow on Youtube.

Now having over 50000 subscribers, Hot For Food has quickly become a popular vegan cooking channel. And with the intent to bring vegan food into the mainstream, they are certainly doing a great job. The chefs of Hot for Food, Lauren and John take the comfort foods you know and love, and make them vegan. Their vegan comfort food creations not only look amazing, but they taste even better!

Some recipes to check out are: Vegan Cheesy Chive Biscuits, Acai Bowl with Hemp Granola, or how about The Perfect Tofu Scramble? If you’re looking for a simple recipe, you might like Easy Vegan Sweet Potato Mash.

They create meals your non-vegans friends won’t be able to resist. From Vegan Peanut Butter Cups to Vegan Poutine to Pizza Pockets. With their most popular video so far being Chipotle Lime Fries.

Hot for Food is now part of Kin Community, a Multi Channel Network that focuses on female content creators. And it’s the #1 lifestyle network on Youtube! It’s great to see the vegan diet getting a wider audience. You can also get Hot for Food’s tasty recipes by visiting the Hot for Food blog.

Kristina’s channel has grown quite a bit over the past couple of years. She follows a low fat, raw vegan diet and brings her energy and enthusiasm for fruits and veggies to her audience.

Kristina is clearly passionate about raw vegan living. Inspiring people to have more raw fruits and vegetables in their diet, she encourages everyone to eat at least one raw meal a day.

You can also watch her videos in Spanish, and you can find recipes and more about her new book on the FullyRaw website.

High quality videos with a lovely, calming soundtrack. Peaceful Cuisine is vegan cooking and baking to music. There are usually two videos for you to choose from, so that you can go without music if you prefer. No words are needed, as vegan Chef Ryoya will show you how to make the recipe, step by step. The end result is a delicious creation, artistically presented.

From Blueberry Banana Muffins, Pumpkin Pudding, to Matcha & Adzuki Twisted Bread, Pumpkin Sticky Buns, Sweet Potato Tart, and Old Fashioned Doughnuts, you’ll find something you like. There’s even a video to help you make your own Vegan Mayonnaise. When learning the recipe, you get to just relax, listen to music, and watch the talented Chef Ryoya go to work!

You can also find Ryoya doing do-it-yourself projects around the house in the DIY playlist. Read an interview with Ryoya and visit the Peaceful Cuisine blog, available in both English and Japanese.

Or you can choose from more recipes like One-Pot Pasta Alla Puttanesca, Shepherd’s Pie, Vegan Nutella, or Oven-Baked Pasta. They seem to be able to veganize anything, and make it low fat to boot! You’ll find something to suit your fancy.

The Vegan Corner is starting to feature some of fellow Youtuber, Freelee the Banana Girl’s favourite recipes, beginning with Potato Rice Curry. And you can now learn a bit more about the Chefs, Raoul and Miriam and find their vegan cooking recipes on The Vegan Corner website.

Vegan recipe creations set in the Zombie Apocalypse. Entertaining, fun, and skilled in the kitchen, Jon and Chris, The Vegan Zombie Crew, fend off zombies while cooking up a storm.

Some of their popular vegan creations include a Vegan Breakfast Burrito, Black Bean Veggie Burgers, Vegan Cheese Stix, Vegan Fettuccine Alfredo, and an Easy Chocolate Cake recipe. And there are a number of raw vegan recipes too! There’s Raw Vegan Cheesecake, Raw Vegan Borscht and Berry Smoothie, and many raw vegan juice recipes.

Find their recipes, The Vegan Zombie Cookbook, and zombie apparel on their website.

Vegan Black Metal Chef is a vegan cooking show with a black metal theme, featuring Brian Manowitz. There’s no talking in these videos. Instead, the recipe instructions are provided through a metal sound track, playing in the background, with the lyrics written by the Chef himself.

Dressed in full costume, the Vegan Black Metal Chef creates his masterpiece. The result is a creative and entertaining show based around a unique blend that has attracted quite a fan base. Vegan Black Metal Chef Episodes have so far included recipes for Eggplant Parmesan,Buffalo Seitan Bites, Indian Feast of the Gods, Pad Thai, Vegan Lasagna, and more.

The Sweetest Vegan has quite the recipe repertoire. You’ll certainly want to check out the Vegan Sweet Potato Pie recipe! And there are plenty more delicious, often southern inspired vegan recipes you won’t want to miss.

There are dessert treats like Sweet Summer Oatmeal Squares, Sweet Spaghetti Squash Dessert recipe, Florida Lemon Bars, and Cornmeal Blackberry Pancakes. And there are creative, kid-friendly recipes like the Minion Despicable Me 2 Tart.

For those searching for vegan comfort food, there’s even a series of McDonald’s Fast Food made Vegan recipes. The series features everything from Big Mac Burgers to Baked Apple Pie to Sausage Biscuits, all being made vegan. The Sweetest Vegan is quite the cuisine and pastry artist!

Cooking with Plants also has a bunch of homemade vegan cheese recipes! There’s Smoked Paprika, Herb & Garlic Almond, as well as homemade Soy Yoghurt, nut-free Cream Cheese, and even a Stretchy Melted Vegan Cheese to go on your pizza!

It’s always nice to have healthy, vegan recipes already be oil-free. That way you don’t need to make any alterations. You can get Anja’s recipes on the Cooking with Plants website.

And find more oil-free, plant-based recipe websites with plenty of healthy, vegan meals to choose from.

Edgy Veg has vegan recipes for everyone. Candice takes popular meals and makes them vegan. Macaroni and Cheese, Vegan Buffalo Hot Wings, Veggie Nuggets, a vegan McChicken Sandwich, Vegan Pulled Pork Sandwich, and more, all made vegan! Entertaining as well as instructive, Candice explains what you’re doing and why as she takes you through the recipe.

Some other recipes you may not want to miss are: Pumpkin Mac and Cheese, a Vegan Pumpkin Pie Smoothie, Latkes, and Cookie Dough Ice Cream. Oh, and of course the Homemade Peppermint Patties! Find the recipes on The Edgy Veg website.

Mary brings a sense of humour to vegan cooking. Helping to show that being vegan doesn’t mean you have to live on kale and raw broccoli, Mary’s Test Kitchen also has What I Eat in a Day videos. In these videos, you can see just what Mary eats in a day and how she preps her meals.

Although she’ll be taking a bit of a break from her regular videos for a while, to heal up an injury, she’ll still be making videos to help answer your questions. And there are plenty of vegan recipes already on her channel that you can make!

Alongside these vegan recipes, there are also What I Eat in a Day and Q&A style videos, answering questions about the vegan lifestyle. Visit the Sweet Potato Soul website to get the recipes and learn a bit more about Jenné.

Over on Potato Strong, Will creates low fat, oil-free, plant-based recipes. Following Dr. McDougall’s Starch Solution, most of the recipes are starch-based. With dishes like Lentil Shepherd’s Pie, Easy Quick Oatmeal, and Easy Curry Fries, you can make a healthy, filling meal without much fuss.

But, as great as they are, it’s not just about potatoes. You can find a number of rice and bean dishes like an Easy Burritos, along with recipes for Split Pea Soup, Lentil Chickpea Burgers, a No Fat Vegan Chili, and Tofu Scrambles. The recipes are often simple to prepare and don’t require fancy ingredients.

There are also video interviews with plant-based nutritionists and other tips for living a healthy, plant-based lifestyle. And there’s a Potato Strong Recipe Guide e-book to get you started, that you can find on the Potato Strong website. You can learn more about Will and his plant-based health transformation, in an interview with Potato Strong.

Originally from Sweden, Jenny is currently in Berlin. On her channel, you’ll find recipe videos interspersed with occasional What I Eat in a Day videos, along with other Q&A and beauty videos.

Jenny also has a blog where you can get additional vegan recipes. And she has a recipe cookbook too, currently available in Swedish.

There are raw vegan recipes in the mix as well, like Apricot & Fig Jam, a Red Velvet Smoothie, and Raw Vegan Granola. And if you’re looking for some easy plant-based recipes, just type “easy” into the search bar. An oil and gluten-free Easy Vegan Pizza with a 2 ingredient crust and Vegan Quinoa Curry are some of the creations you’ll find.

Along with other videos, Judy also shares What I Ate Wednesday videos. And, if you’re looking for affordable meals on a vegan diet, you can find them in her Plantbased on a Budget e-book.

Helping you and your family go vegan. Monique shares recipes like Vegan Texas Toast, Rosemary Garlic Potatoes, Buffalo Cauliflower, Simple Vegan Macaroni & Cheese. Along with recipes, Brown Vegan has helpful videos like How to Plan a Vegan School Lunch for Kids, How to Get Your Kids to Eat More Vegan Meals, and Tips to Get a Spouse to Eat Vegan.

Get tips for being vegan at university with 19 Daily Easy Student Meal Ideas (high carb, low fat), What I Ate Today, other similar videos, and Robyn has a channel dedicated to vlogs. SweetSugarCrumble recipes include: Vegan Wellington, Vegetable Pasty (high carb, oil-free), Mango and Cherry Crumble, and Sweet Potato Risotto.

So, if you’re looking for a vegan recipe that doesn’t take long to make and is presented by an upbeat, positive vegan, stop by Robyn SweetSugarCrumble’s channel. She has a recipe e-book full of high carb, salt-free, and oil-free (mostly gluten-free) vegan recipes, including her Sweetsugarcrumble recipe. You can find it on the SweetSugarCrumble website.

But there are other recipes too, like Vegan Curry Pizza and Sweet Potato Gnocchi. All of these vegan recipes can be found on the Feasting on Fruit website.

Another vegan cooking channel to check out is the Raw. Vegan. Not Gross recipes on Tastemade, there haven’t been any new recipes in a while, but it’s still a good resource. And Veggietorials, Happy Healthy Vegan, Veganlovlie, Kathy Patalsky, and Divine Hostess are Youtube channels that include vegan cooking recipes alongside other vegan themed videos.

If you’re looking for healthy vegan recipes, take a look at this list of oil free, plant-based recipe websites. Or maybe you’re interested in finding some vegan snack foods?!